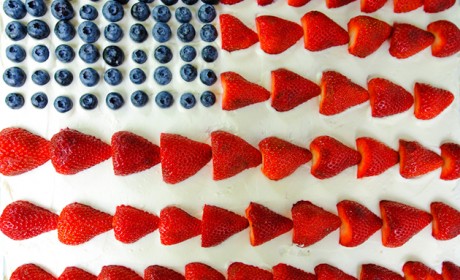 Food on the Fourth can run the gamut, and don’t forget dessert! Here are four festive — and tasty! — options.

Add gelatin mixes in a large bow. Stir until completely dissolved. Add enough ice to cold water to measure 2 cups. Add to gelatin and stir until ice is melted. Refrigerate until slightly thickened.

Cover 13×9 with cake slices, then spoon gelatin/fruit mixture over cake. Refrigerate until firm.

Spread Cool Whip over cake. Use remaining strawberries to create flag stripes and the rest of the blueberries for the stars.

Beat cream cheese, sugar and vanilla with an electric mixer until fluffy. Beat in eggs until well combined. Fold in 1 cup of blueberries. Pour filling into crust. Bake until set, about 45 minutes. To prevent crust from over browning, cover pie with foil during the last 20 minutes of baking. Cool completely.

Beat jam until smooth, spread over cheese filling. Arrange 1 cup of blueberries in a star pattern on top of the jam.

Directions:
Blend watermelon in a blender until liquefied. Stir in lime juice and zest. Pour mixture through a sieve into a bowl, then spoon juice into popsicle molds with sticks inserted and freeze.

Sprinkle unflavored gelatin over 1/4 cup milk in a medium bowl and let stand 5 minutes. Bring remaining milk to a boil. Remove from heat. Stir in sugar and vanilla. Add to plain gelatin mixture and stir until gelatin is completely dissolved. Cool for 10 minutes.

Cover with 2 teaspoons cherry gelatin and refrigerate for 2 hours or until firm. Remove from cups before serving.