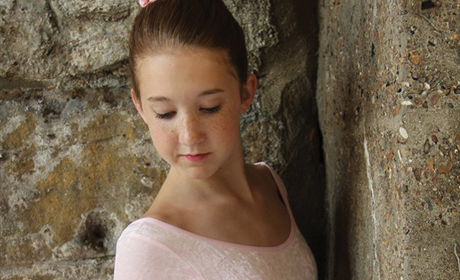 Thirteen-year-old Aubree came to dancing four years ago, after her mom noticed her twirling in between sets during volleyball games. An early stage performance, complete with costumes, a final bow and applause and she was hooked.

“She told me after her first performance, ‘Mom, when I got on stage, I knew that’s where I belonged,” says Aubree’s mom, Tracey.

Aubree’s instructors at the Otto M. Budig Academy agreed, and although she didn’t advance right away, she has since proven her considerable talent. After only four years of dancing, Aubree has performed in the Cincinnati Ballet’s annual production of The Nutcracker and understudied for the role of Clara, as well as appeared in ALICE (in Wonderland) and the company’s recent world premiere of Camelot.

When asked why she loves to dance, Aubree offers a wide smile and answers that, “It just feels right. It feels like I belong dancing. Even though it can be painful sometimes, it’s still enjoyable.”

Lucky for Aubree, she has a solid support system from a mom who is a strong supporter of bringing the arts to children. When she first realized that Aubree wanted to pursue dance, and all indicators, including having the right body type and feet for dance, were that she would be successful at it, Tracey knew she had some homework to do.

“I had to learn more about ballet,” she says, adding that she needed to know what it would take for Aubree to succeed and how to support her goals. Ballet can be an expensive, time-consuming sport, but Aubree and her mom have access to experienced dancers from the Cincinnati Ballet’s company.

“There are so many great dancers out there to look up to,” Aubree says. She’s been able to learn from one of the company’s principal dancers, Sarah Hairston. “Sara’s an amazing teacher, she inspires me a lot,” says Aubree. And she also admires the dancing of soloist Courtney Connor Jones.

When school’s in session, a typical day for Aubree includes waking up around 6:45 a.m., going to school, then home for homework and dinner. Ballet class starts around 6 p.m. several nights each week and can go until 9 p.m. If she’s dancing in a production, Aubree will leave  school to be on time for rehearsal, which sometimes means eating dinner and changing clothes in the car on the way.

It’s a long, tiring day, Tracey says, but it’s also a chance for them to talk honestly about a life in ballet. “I’ve always been realistic,” says Tracey, adding that she and Aubree have talked about things like how they can’t have a pet since there’s no time to care for one, or how her school friends might drift away as she becomes even more involved in dancing.

As for her future? Aubree mentions teaching after a career on stage, and her dream is to dance with the New York City Ballet Company. But, just like her mom has taught her, Aubree is also realistic and declares, “I will go where I fit.”