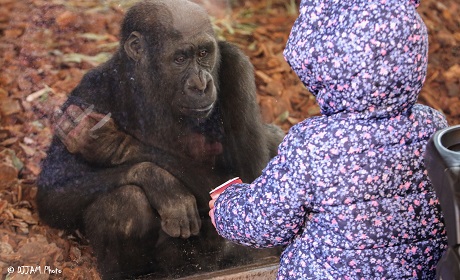 According to Cincinnati Zoo Director, Thane Maynard, there is a lot more to the Gorilla exhibit other than the adorable baby gorilla, Elle – almost half of the building materials used were manufactured using recycled materials. Even cooler, 44 percent of those materials came from local suppliers.

This isn’t the first time the zoo has been in the “LEED” with it’s sustainable building practices. Within the past decade, they were honored to receive other green awards and certificates including the first LEED Silver certification in Cincinnati in 2006 and the first LEED Platinum in the city in 2009. They were also the first zoo in the world and project in Ohio to receive Living Building Challenge recognition for its Painted Dog Valley habitat.

For the Cincinnati Zoo’s 150th anniversary in 2025, their goal is to become a zero-waste facility, according to Maynard.

Need to recycle your cell phone? Since 2011, the zoo has been collecting used cell phones to protect gorilla habitats in Africa, too, where the mineral used to make cell phones is mined. So far, they have recycled over 100,000 cell phones! To join in on this initiative, visitors can toss their old cell phones in a bin located at Gorilla World.

Another way the zoo is thriving to reach it’s 2025 goal and to a be a more sustainable zoo is by working to enhance and improve animal habitats through it’s “More Home to Roam” campaign. For more information and to help the Cincinnati Zoo’s “More Home to Roam” vision, go to cincinnatizoo.org/support/more-home-to-roam/.