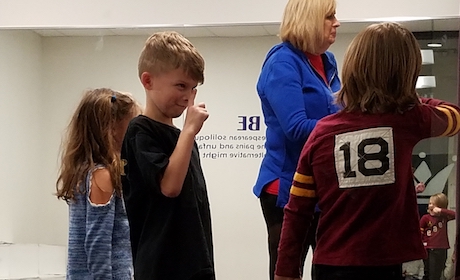 My son’s new favorite activity … quizzing me about my positions on the fake stage he has “outlined” on the carpet in our playroom. He will direct me to show him, “Downstage right. Now go to center stage. How about upstage left now, Mom?” He not only has increased his theatre terminology, he has increased mine too! 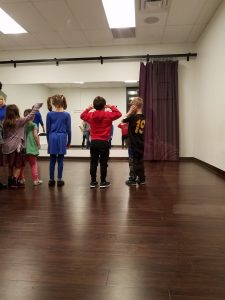 He just finished week four of his beginning drama class through The Children’s Theatre of Cincinnati. In the last four weeks he has learned (and taught me) theatre terms as well as practiced his skills in acting out different emotions, behaviors, and animals. He has begun to recognize how hard actors must work to pretend to be someone or something else. He has come to realize that the people he sees on shows on TV or on stage are acting out roles assigned to them. In the mere four weeks he has participated in drama classes, he has gained knowledge in the hard work it takes to be in a theatre production.

My boy loves sports, but thanks to The Children’s Theatre of Cincinnati, he has discovered he loves the arts just as much! As an educator, I know that his drama class is encouraging his creativity, confidence, decision making, focus and collaboration! Already planning your child’s summer vacation?  Check out what The Children’s Theatre of Cincinnati has to offer! https://www.thechildrenstheatre.com/learning-the-craft/tct-summer-camp