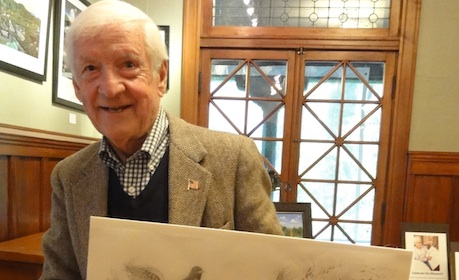 John Ruthven Day takes place Saturday, November 14 at Cincinnati Nature Center (4949 Tealtown Road, Milford).  Help John celebrate his 91st birthday and a lifetime connection to the Nature Center.  Free admission with birthday card for John (hand drawn are encouraged!)!  John will be on hand from 1 – 3 p.m. to share treats and stories from his adventures around the world.  Call 513-831-1711 or visit cincynature.org for details.

John A. Ruthven: Portrait of a 20th Century Audubon 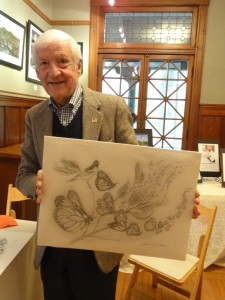 From the banks of the Ohio River to the palaces of world leaders, renowned wildlife artist and conservationist John Ruthven has taken his love of nature and his amazing artistic talents across the globe, inspiring generations to appreciate, preserve and protect our natural world.

As a young boy growing up in Cincinnati, John lived life much like an aspiring Daniel Boone, taking every opportunity to explore the wildlife around him and capture in drawing the flora and fauna that continually fascinated him.   John frequently hiked down to the Ohio River from his home in Walnut Hills, where sitting on the shore with sketchbook in hand he would begin to hone his artistic skills.  He was encouraged by his mother and teachers to pursue his obvious talents and enrolled in Saturday morning classes at the Cincinnati Art Academy.

As a teen John recalls his love of “ just being in the wild” and would spend hours exploring the woods and river and dreaming of the travels and adventures of his hero John James Audubon.   John longed to emulate Audubon’s life and masterworks and in that dream his destiny lay.  In 1948 at the age of 18 John was drafted into WWII and served as a 2nd Class Petty Officer on a destroyer escort.   During his military service John also acted as art director for the Subchaser Training Center News  publication where he not only covered news of the war, but in his Ruthven way, included sketches of the birds and wildlife he encountered on the seas.

Returning home John graduated from the Cincinnati Art Academy and the Jack Storey Central Academy of Commercial Art.  He then opened a commercial art studio, where according to John, he specialized in everything, always with the intent of building his life’s career in wildlife art.   A major breakthrough in John’s career  when he was contracted to illustrate the cover of Ohio Outdoor Magazine, in which he painted his brother poised with a bow and arrow.  In 1964 an even greater breakthrough followed when John submitted his painting entitled Redhead Ducks to the Federal Duck Stamp competition and won.

Supported by the original Abercrombie and Fitch outfitters, a schedule of shows and exhibits around the country thrust John and his artwork onto the national stage.  He was now being recognized for his unique talent of capturing his wildlife subjects with incredible accuracy and detail.  John continued to pursue his wildlife art wholeheartedly for the next several decades and his paintings now grace the walls of homes, art galleries, museums, and state rooms around the world.  For those of us who can only read of the adventurous tales of Daniel Boone in the pages of a book, to listen to John Ruthven speak of his adventures travelling the world in search of wildlife subjects is like a step back in time.  John’s passion for nature is contagious and his life’s list of achievements, friends, adventures and contributions to environmentalism speak for itself.   An avid supporter of worldwide conservation efforts, John’s art has not only inspired thousands of individuals to preserve and protect our world’s lands and wildlife, but has raised millions of dollars to support these causes.

In addition to the many organizations John has aligned himself with over his lifetime, Cincinnati Nature Center is near and dear to his heart.  As a founding member John has remained a steadfast friend and supporter for more than five decades, sharing his time, means and talents as a Trustee and Honorary Trustee and by gifting an incredible collection of artwork over the years for the Nature Center’s use and fundraising efforts.   When asked what the Nature Center means to him, John is quick to respond.  “It echoes my own life.  It offers the freedom and beauty of being at one with nature.”

For John, it is most important that the lands, streams, forests, fields and ponds of Cincinnati Nature Center be preserved for the many generations he envisions coming here and finding their inspiration.  Perhaps someday a youngster will sit on the shore of the Nature Center’s Powel Crosely Lake and marvel as a red-tailed hawk soars overhead, sketchpad in hand and dreaming of their hero – John A. Ruthven.