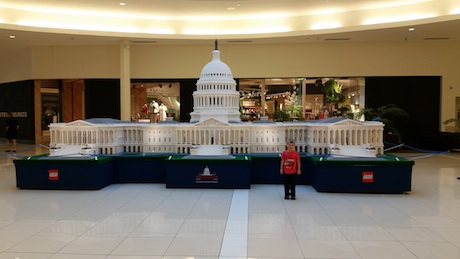 My oldest has been working long and hard to earn a trip to the LEGO Store at Kenwood. He FINALLY reached his goal!  I loaded up the kids for a “quick” trip to Kenwood Town Center.  Our “quick” trip ended up taking us an entire morning.

When I pulled into Kenwood my oldest quickly noticed a large travel trailer with LEGO figures parked near the road. Of course as soon as he noticed it he let out a high pitched squeal and a, “Please can we go check it out?!?”  I secretly might enjoy LEGO’s as much as he does, so I told him we could all go check it out! I also enjoy stumbling upon adventures with them!

Upon entering the mall we came across a beautiful model of the Washington Monument. Both of my kids couldn’t take their eyes off of how tall it is. I knew right then that our “quick” trip was going to be a lot longer then I had anticipated. There are “Iconic buildings and architectural sturctures throughout the mall made entirely of LEGO bricks.” Our favorite was definetly the Capitol Buidling! It was designed at a 1:29 scale, and it took a team of 8 master builders 1700 hours to complete. It is spectacular!

The Roadshow actually opens on July 4  but all of the models are up with their brief history and stats on how long it took the LEGO masters to build and its scale compared to the real building. My oldest was more excited to see these amazing displays then to go to the LEGO store. We walked the entire mall checking out all of the replicas.  Models included: US Capitol Building, The White House, Supreme Court, Washington Monument, Jefferson Memorial, Lincoln Memorial,Statue of Liberty, Independence Hall, and Old North Church. In addition to those models there are also mini-figure scale “Brickscapes”.  July 4 -19 there will also be a fully staffed hands-on Play Area for guests!!!

“The LEGO® Americana Roadshow: Building Across America is a travelling display of large scale LEGO models replicating some of our nation’s most well known landmarks.”

Tina Pratt is one of our Mom Reporters and the mom of two littles.  She is a former PreK – 5 special education teacher that now works as a behavior coach.  She enjoys being a tourist in her own town and finding ways to embed lessons into everyday fun!