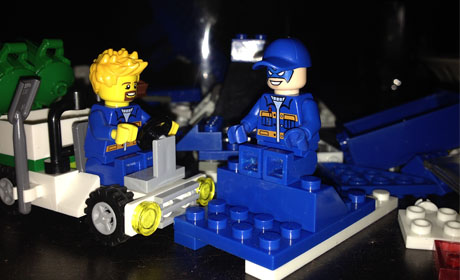 We’ve had a LEGO set in the house for quite some time now. It was one that had specific instructions on how to build a certain thing. When we got it, we put it together. They played with it for a few hours and then they were done with it. The set has been sitting in a bucket untouched for months now … until Saturday. My youngest woke early that day. In an attempt to keep him quiet while the others still slept, I grabbed the LEGO set and poured it out on the floor. He said, “But the papers are all gone and we don’t know how to build it.” He was surprised to hear me say, “We can build anything we want!” Thus, the power of the block ignites.

He was off. Constructing funny looking men (even some without the actual head with a face), then helicopters, boats, houses, dogs, etc. He built and built for about two hours before our oldest finally got up. She happily sat beside him in our bedroom floor and played quietly with him … building her own little things. My husband rolled over and saw my head beside the bed and asked what I was doing. He couldn’t see the kids. He had no idea they were there because they were so happy and content playing and building with the LEGO set in the floor. I told him what we were doing and he said he thought they were still asleep because it was so quiet.

Throughout the day, they kept playing with them. Even when we left to run errands, they took some pieces with them. The playing continued all day Sunday. When it was time for bed last night, I said they could play for a few more minutes if they would go wash up, put on jammies and brush their teeth for bed. I’ve never seen them do their routine that fast and efficient. LOL. They were right back where they were in minutes. There was not even a whine about bedtime when the time came because I told them they could pick right back up when they woke in the morning and after they got ready for school and ate breakfast. This morning’s routine … smoothest ever! LOL.

Who would’ve thought the power of the block was so strong? LEGOs helped me stay sane this weekend. Haha. I’m going to start buying those little packs to add to their collection as a reward for doing so good throughout the week. I hope it stays.