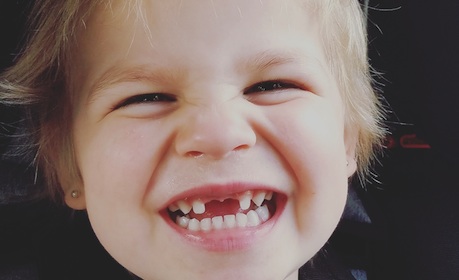 My husband often teases me that I am the master of catastrophic visualization. I carefully pick shoes for summer play (Keens for the WIN!) to reduce the chances of my children face planting over tripping over the toes of flip flops. I have put pool noodles under my children’s sheets as a transition from a bedrail to no bedrail to provide another level of support. I have W.H.A.L.E. program stickers on all four car seats and an envelope in my glovebox with the medical information of our family in case we are in a car accident. I like to be fully prepared for all situations and to best prevent accidents.

BUT … accidents happen … even with the best precautions in place. Accidents are “an unfortunate incident that happens unexpectedly and unintentionally, typically resulting in damage or injury.” It has taken me six months, but I am finally ready to share about the accident that happened in our home. Over the last six months, I have felt sadness, guilt, remorse, more guilt, and finally peace. Peace with the fact that accidents happen even if your children are practically bubble wrapped.

Back in September, my children were in our living room while my husband and I were planning dinner in the kitchen, which overlooks our living room. They were chasing each other around and I asked them to stop running around as the catastrophic visualization kicked in and I was certain someone would fall and get a black eye from the coffee table … which happened to my son three years earlier. They stopped chasing each other and sat on the couch, so I continued to help my husband.

Then there was a thunk. A very loud thunk followed by screaming. I rushed into our living room and found my daughter on the floor. I picked her up and blood was flowing out of her mouth. I lifted up her lip and immediately knew she broke her two front teeth. She immediately shared between sobs that she was pretending to be a puppy and was trying to jump on all fours from the couch to on top of the coffee table.

Somehow, it is quite a blur, I managed to call the emergency line for our dentist. I left a message and then decided to rush her to Children’s. After being seen, the ER doctor decided that he could pull them back into place and assured us that they would end up being just fine. However, the ER doctor didn’t know my daughter or that she has some oral motor tendencies like sucking on her lower lip. As I told him this, she began to do it and pulled her teeth back out of place. He ended up recommending we visit the on-call dentist at Children’s Main Campus.

I did my best not to cry during the SEVEN hours we were at the hospital. I held her. Caressed her cheeks. Snuggled her while she slept in the ER waiting room. Finally, we saw the dentist and she recommended pulling both teeth as my daughter broke both at the root. I held my daughter while the dentist pulled out her two front teeth with only a local anesthetic. My daughter was so brave. More brave than I was. At 2 a.m. we finally left the hospital. 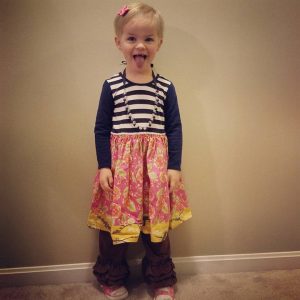 Sister recovered quite quickly. She was back to eating her normal diet almost immediately. In the following days I called her dentist, had her seen by a pediatric dentist, an orthodontist, and spoke to multiple speech pathologists about potential false teeth/spacers and the possible speech articulation side effects of not having her front teeth. At the end of all of these conversations, I was given the same recommendation: “Just let her be. She will be fine.”

Six months later … I finally have come to terms with the fact that accidents do happen and will happen. My toothless wonder is JUST fine and actually really likes showing off and telling the story about her 18 tooth grin.