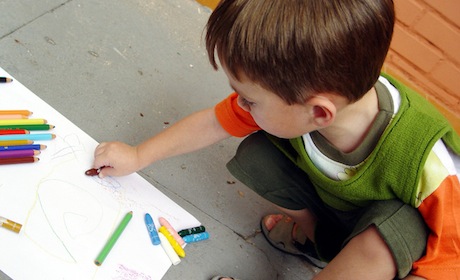 My son called me mean. It wasn’t the first time and will not be the last. He called me mean because I hid his tablet on him. We created a “behavior contract” at home and if he stays on green (the clip up/clip down behavior system his teacher uses) Monday through Thursday, then he can take his tablet to school on Friday to use after school at Latch Key. A few weeks ago, I arrived to pick him up and saw his bright green tablet in the middle of the floor, his classroom folder two feet away on the floor, all of his papers tossed like confetti around his fully opened backpack with all of its other contents spewing out. I grabbed his tablet and put it in the Latch Key cabinet (so no one would step on it or grab it) before heading outside to collect him from the playground. We walked back inside and he began cleaning up his hot mess of a backpack. He picked up everything and put it in his backpack and walked to the door. I asked him if he had his tablet, to which he responded, “Of course!” I was tempted to drive home and leave the tablet in the cabinet overnight to see when he realized it was missing, but I am not THAT mean. So, I mentioned that it wouldn’t hurt to just double check. He tried negotiating and getting out of checking, but he finally did and froze. He began looking for his tablet and couldn’t find it. After about two minutes, which I am sure felt like an hour to him, I told him I found it face up on the floor where someone could have stepped on it or taken it, so I put it safely away in a cabinet. “You are so mean, Mom!” was his immediate response.

So … maybe I am, but I would do it again. As a parent, I feel like it is my job to teach my children right from wrong and responsibility. With these tasks, I am likely going to come across mean. I could have very easily picked up all of his things, placed them all in his backpack, zipped it up and moved on, but what would he have learned? He wouldn’t have learned anything except that I will take care of his things. He would not have learned to take responsibility for his items. So, I kind of set him up for a brief moment of panic, but guess what? He learned a valuable lesson and every Friday since, I have found his tablet safely in his backpack and his backpack zipped up. He learned responsibility from my “mean” lesson.

I believe in affordable mistakes. I believe in letting both of my children make smaller, less serious “mistakes” so they learn valuable lessons from them. The case of the missing tablet wasn’t the first affordable mistake I have let my oldest make. Twice this school year he has lost his library book, which comes as no surprise to me as his backpack literally vomits up all of its contents on the Latch Key floor each afternoon. I didn’t help him look for them. I emailed his teacher to let her know they were missing, emailed the librarian to get the cost of the books for him, and stuck a note in his backpack for him to look for the missing books. Luckily for him, he has found both books. If he hadn’t found them though, he would have had to pay for them with his allowance. I will proudly raise the “Mean Mom” trophy high into the air and smile. I know I am teaching my children responsibility one affordable mistake at a time, and hopefully they learn from them so that when they are older they will not make bigger, more serious mistakes.