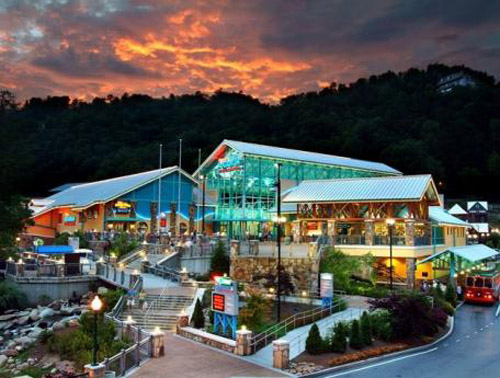 Gatlinburg, Tenn., is booming with excitement at Ripley’s Aquarium of the Smokies.

“Are we there yet?” asks 4-year-old Lilliana. She has been on the edge of her seat since we told her we were going to the aquarium. She has no idea about the excitement she is in for!

Little animal lovers everywhere have something new to look forward to in Gatlinburg, Tenn. Marking the Ripley’s Aquarium of the Smokies’ 10th birthday, it has added the new exhibit Ripley’s Penguin Playhouse to its already impressive lineup. It features African black footed penguins. Ripley’s Aquarium recently received an award from TripAdvisor claiming it the “Number One Aquarium in the United States.” The best part, it’s only about a four-hour drive from Nashville.

There are more than 10,000 exotic sea creatures for you to gaze upon in this fabulous award-winning aquarium. From tiny sea horses to 12-foot sharks, there is something for everyone. Exhibits include an underwater Tropical Rainforest, Gallery of the Seas, Systems Control, Coral Reef, Ocean Realm, Stingray Bay, Touch-a-Ray Bay and more. One of the most awesome exhibits is Shark Lagoon.

You venture into Shark Lagoon under the water via a 345-foot tunnel (part of it is a moving walkway), and see sharks, fish and the occasional divers. Although Lilliana was a bit frightened by the sheer size of the sharks, she was able to find something about them that intrigued her. Being able to see them from underneath, she saw how many of them had silly faces. The sawshark was the first she was unsure of, but when she saw it’s mouth she exclaimed, “Look, it has big lips!” Even the stingrays showed their faces as they floated overhead.

The Penguins are HERE!

This grand, new exhibit creates a fantastic adventure for all ages – including the penguins! After enriching your minds with the breath-taking underwater creatures of the rest of the aquarium, you are left with the most intriguing and interactive exhibit yet.

Enter and look down! That’s right, there is a solid sheet of acrylic beneath you in a portion of the walkway that lets you view the penguins as they swim beneath. In this wonderful habitat, the penguins are free to choose indoors or out – not a choice given to all penguins around the world. A platform also allows them to get right up to the window so you can get an extra close look at them. But, if you really want to get beak-to-beak with these marvelous animals, take your turn crawling through the acrylic tunnel in The Penguin Playhouse. The first part of the crawl-through tunnel is completely surrounded by water! This fantastic feature allows the penguins to see you making it interactive for both parties.

After you’re done viewing the penguins from the inside, pop outside on the patio and see them in action in their outdoor habitat. It’s a whole new world for them out there.

For an additional small fee, visitors can also get hands-on interaction with an African black footed penguin – with the help of a marine biologist.

With all the original exhibits and the new addition of The Penguin Playhouse, Ripley’s Aquarium of the Smokies makes for one super fun and wonderfully educational family getaway for families.

After a long day of walking and site seeing in downtown Gatlinburg, what better way to rest your tired body than in a cozy cabin? Mountain Rentals of Gatlinburg offers a two-bedroom log cabin called “Bird’s Eye View” – literally on the side of a mountain. Along with the usual amenities, it had Jacuzzis in both rooms, full bathrooms in both rooms, a full kitchen, living room with a double-sided fireplace, pool table, hot tub and a large back deck that overlooked the side of the mountain. The driveway to the cabin was a little on the tricky side; make sure your car has a good emergency break. A great ending that makes for a relaxing family vacation.

Kiera Ashford is associate editor for this publication and a mother of one with one more on the way!

Sink into history at the brand new Titanic museum.

You will be in awe as you approach the massive, new museum, Titanic: World’s Largest Museum Attraction – it’s half of the ship at 50 percent to scale from the original!

Aside from the artifacts, the many hands-on interactive features, timeless photos and knowledgeable crew, you are given the opportunity to hear and even experience what the passengers of the Titanic felt on that fateful night back in April 1912.

Visitors receive a boarding pass (your ticket) that has a name of an actual passenger from the ship. As you tour the museum, you learn how members of each class went about their day aboard this jewel of the ocean.

The captain’s bridge was a favorite part among the many aspects of the museum. Listen to the captain tell his story and relive that historical night. Walk up and take the helm. As you exit the bridge, you will go “outside” onto the deck into a glistening winter night and a sky filled with stars. You will notice a dramatic drop in temperature. Hear how the crew reacted to the coming iceberg, feel how cold the water was that night and touch an “iceberg” – yes, an actual growing ice wall.

At one point of the tour as you walk the halls of the ship, there is a change in the lights and sound and you will experience what it was like to see the water come crashing down the stairs – but it stops short as it slams against the thick glass. It’s an adrenaline rush you won’t be expecting.

Your experience doesn’t end there. View the different quarters of the first class to the third-class and even the grand staircase to scale. But, you must visit this magnificent museum for yourself and witness what simply took my breath away.

As you come to the end of your tour, take a moment in the remembrance room. Here, you will learn the fate of the passenger whose name you hold in your hand. A memorable moment that just may bring a tear to your eye … an experience you don’t want to miss.