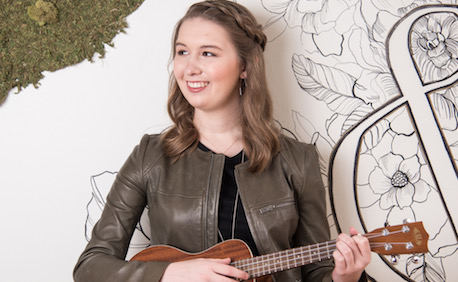 Lilly Gieseke is known for writing poems, songs and short stories. Last summer, the junior at Summit Country Day, started humming a song, and wrote it out. One song became another and another. And soon, Lilly thought, “I should add a plot and then it started to feel like a musical.”

So the 17-year-old added a few songs and then a few more, and this Friday, April 13, she’s producing and directing her very own one-hour musical, A Tale of Two Friends.

Lilly started playing the violin at 4 years old and later picked up the guitar, ukulele and piano. She is obsessed with musicals, often discussed by text with her older and equally musical-obsessed sister, Mary.

“For me, once I get the melody, I surround it with chords and then it all comes together,” Lilly said.

The musical – for young audiences – follows the story of two friends, David and Clara, who share a love of fairy tales and writing. Together they write a book that comes to life, with the main characters facing and overcoming obstacles along the way.

One of six kids, Lilly often has had an audience for her songs at home, has performed with the since-disbanded Turkey the Dog Band, and has performed in school plays and with a poetry group at Word Play, a Northside nonprofit that fosters storytelling. 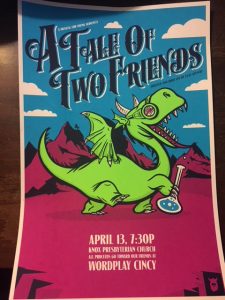 But directing and producing is new to her. And with that, comes a little stage fright.

“When I wrote the musical I thought I would love to see it on stage, but I didn’t see myself doing that part of it. Ideally I’d hand it off and show up and enjoy it,” she says, laughing. “But I’m 17. And when life makes you write a musical, you have to direct it.”

So Lilly recruited teenagers from Cincinnati-area schools to star in the show and play music, built sets in her Hyde Park basement with her father, and asked her neighborhood church if she could use the space.

The show is appropriate for all audiences and is open to the public. Tickets are $5 for children and $10 for adults and all money from ticket sales will be donated to Wordplay. A Tale of Two Friends debuts at 7:30 p.m. on April 13 at Knox Presbyterian Church, 3400 Michigan Avenue, Cincinnati. Doors open at 7 p.m.