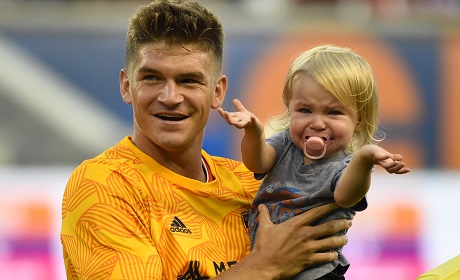 Nick Hagglund grew up in Lakota West with a passion for soccer at a young age. Who would have thought he would have landed right back in his hometown to play for FC Cincinnati.

“I was extremely excited to be home. Back home, right where it all started,” Nick says. “It was the first time in 10 years that me, my sister were both in Cincinnati with my parents.”

Learning about Nick’s journey that led him to become a professional athlete was aspiring. A down-to-earth guy, his friends would also describe him as “really weird,” he jokes. He is also a proud father and husband.

Nick played soccer at the old Liberty Junior School, where his dad was his coach, and biggest inspiration.

“He was the first person who taught me how to love the game, enjoy the game and have fun,” Nick says.

With a little push and shove, his dad was one of the people who inspired him to be who he is today. 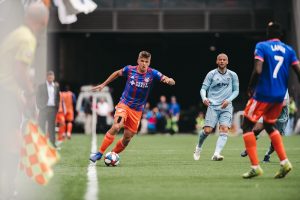 Q: Out of all of the sports you could have played, what led you to choose soccer?

A: When I was growing up I played a bunch of sports. I played volleyball, I played basketball, I played baseball. And when I got to my freshman year of high school, my Dad said it’s good to be good at all sports, but it’s better to be a master at one because eventually you’re just going to choose one when you go to college. He kind of told me to make a choice there of what I love the most, what I enjoy the most. That was the full basis of my decision of what I love to do. So I chose soccer at that moment. I had the most fun [with soccer]. I’m an energetic guy; that’s the most running and the most energy I can expose [laughs].

Q: What advice can you give to kids wanting to play sports?

A: First, love the sport; eat, live, breathe the sport. You have to be so excited when you have the opportunity to play. Second, is to work hard; hard work can take you so far, regardless of how good you are. Attitude, have a great attitude, things will never go perfectly or the way you envision them. Having a good positive attitude, your teammates will feel that contagious positivity. It’s a journey of going through ups and downs to where you get to a point to where you’re living your dream.

Q: How did you maintain your physical strength and endurance growing up?

A: When I was younger I did, it was called ignition, an acceleration training. I never really did lift weights until I was in college. My mom was kinda against it [laughs] – she was like, ‘You’re so young, you’re still growing, you don’t want to hurt your growth plates are anything like that!’ So I would do acceleration training; I would work on form but there wasn’t a lot of lifting. Everything was like body weight – so like pushups, sit ups all of that.

Q: Is weight lifting necessary for competitive sports, even at a young age?

A: I think there {weight lifting} is always a smart way to do it. I think if you don’t know what you’re doing, you can really hurt yourself. If you’re smart about it and you’re doing the right amount of weight for your body type, I think it’s positive. At the same time, I feel like a lot of it is the love of the sport when you’re younger. Just enjoying it and loving it and not feeling like there’s pressure to get stronger, to get bigger. I think that helps as you get older, when especially when you’re younger, I feel like it’s really about just enjoying and loving the sport. That doesn’t always mean winning all of time. That just means enjoying the sport and getting better. On an individual basis, you learning how to play the game, learning you’re gonna make mistakes. Mistakes are the way that you get better. When you’re younger, the individual mistakes and trying to learn from that rather than trying to push winning. Winning mentality is very important, but at the same time when it comes to acceleration training, that is when you’re really committed and you say, ‘This is what I love, I absolutely love this, this is what I want to do to be successful.’ There’s a point where if you force acceleration training or lifting upon someone at a young age, they will not enjoy it as much.

Q: You mentioned your dad being a big inspiration to you, who else did you look up to growing up?

A: My older sister – she is three years older than me. I kind of watched her graze through life being the best at her sport, watching her play volleyball and be all-state, go across the country to a top ten volleyball school, watch her play in the NCAA’s, I kind of just watched the progression of her when I was younger of how to handle the stresses of pressure moments and just doing everything possible to succeed and moving all obstacles aside and watching her persevere through things. My job when I was younger I just had to watch her, take notes [he laughs] and just follow the path! She paved the road for me to see how to do that. And that’s in terms in not just sports, but school, friends … and my mom as well – she’s the one who took me to all of my practices, made sure my laundry was clean, took care of me; she is the first person I would see when I was home, if anything went wrong, she is the first person I would run to, like an emotional support person throughout all of it as well.

Q: What is the most stand-out moment that you remember from your childhood?

A: Specifically with my dad. He was my coach until I was 10 years old. I would say I was usually the best player on the field, and he would never acknowledge me until we got back into the car, he would never ever publicate because he was the coach. He is a great guy and wants everyone to be involved and cared for. But one time we were in a tournament, and I scored the winning goal in the final, we won 2-1, and he put me up on his shoulders and was so proud of me in front of everyone. It was a moment for me – it was really cool for my dad to do that just to show how proud he was publicly. 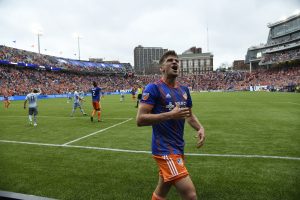 Q: How would you describe a successful athlete?

A: A successful athlete focuses on the things that they can control everyday. I think in terms of your attitude and your effort, and your ability to adapt and learn are key – not just how talented you are but the intangible things that make you an athlete that are outside of the sport itself are ways to be a successful professional. There’s plenty of kids that I’ve seen that have been extremely talented and they just don’t make it. It really takes a combination of hard work and talent to create a professional athlete.

Q: What were some of the challenges you faced growing up?

A: It’s funny, when I talk about challenges when I was younger, I didn’t think about anything just playing and having fun to be honest [laughs]. My probably biggest challenge was when I left my team the Lakota Eagles, that was my best friends that I played soccer with. I went to an older age group where I was a little bit smaller and I had to find my own way to get onto the field. I played with the guys for five years so it was just assumed what role I would play. When I went to this new team, I had to kind of reinvent who I was.

A: I had a really great rookie year; I got a lot of playing time and did well with that. My second year, I hurt my knee, I had an appendectomy so I didn’t play for the second half of the season. It was a grind to get back in the spot where I can start again; it was probably a yearlong process. Just going to practice, puttin’ your head down bringing your lunch pail with ya [he jokes] and just working as hard as you can. That was a position for me, at the time it was really difficult, but then when you look back you’re like, ‘wow’ look at all of the hard work that I’ve done, and now I’m starting again, I’m in a position where I’m playing and that year I got to play in the MLS Cup. It was a cool moment during it, very difficult, but afterwards really cool to see how the hard work paid off.

Q: If you could choose a different career path, what would it be?

Q: Share something unique about yourself as a person and athlete.

A: I have this weird sense of goofiness; i can be silly; can laugh at myself, be funny and goofy and just be myself; and then when I step over the lines it’s business time and I’m able to crunch people in training and get stuck in on tackles; a nice guy off the field, and when it’s time to do my job it’s a different mentality.

Q: Where do you see yourself in 10 years?

A: For me I think it would be really cool to have an opportunity to help lead youth soccer in some way. The knowledge that I have and I’ve gained being in this profession for seven years, I would like to bestow that on kids in Cincinnati.

Q: At the end of the interview, Nick elaborated on the importance of family, and the hard work they, too, put into the life of a professional sports player.

A: When things were up and down, my wife was really a rock for me and for the family, she was there and able to keep my head straight – what’s important, what matters what doesn’t matter. She was really a person that has been through it all with me. A lot of people see the Nick Hagglund, the professional. But there’s my wife who is alongside of me the whole way; she’s along the roller coaster as well. She focuses on the importance of things of who we are and what we do. I come home from maybe playing a terrible game and she loves me no matter what. The kids are on the ride, too. There’s a lot that goes into it, it’s not just for the soccer player but for the family side as well. 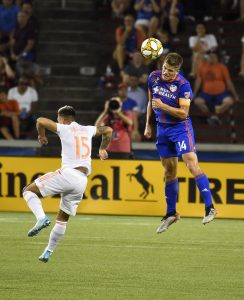