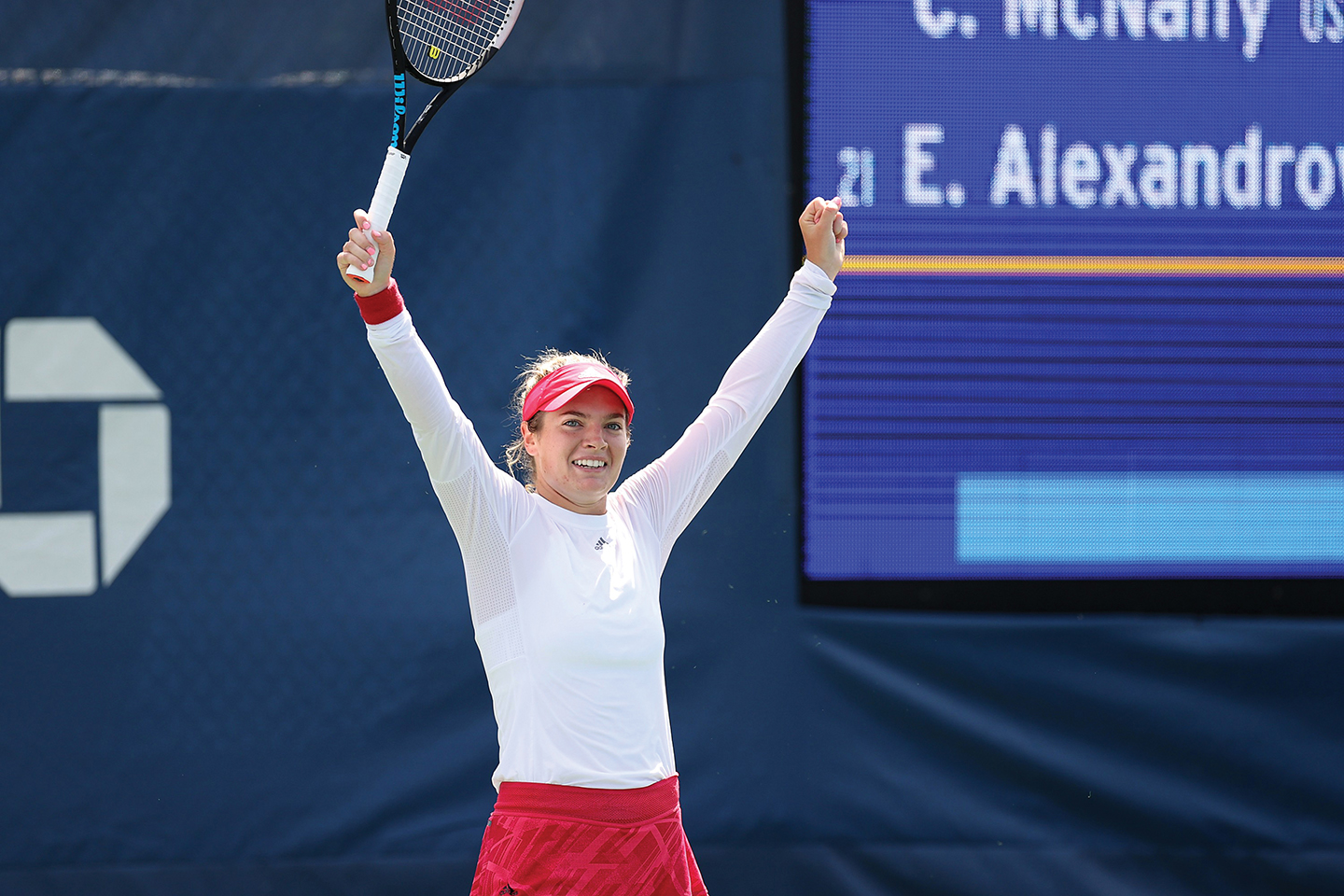 September 4, 2020 - Catherine McNally reacts to beating Ekaterina Alexandrova during a women's singles match at the 2020 US Open. (Photo by Simon Bruty/USTA)

I heard the roaring sound of rackets and screechy tennis shoes. I was talking with Caty McNally, Women’s Tennis Association Pro and next generation WTA star of American tennis players from Madeira, Oh. Caty is the daughter of Lynn McNally, former WTA pro and long-time coach at Harper’s Point who was inducted into the Cincinnati Tennis Hall of Fame in 2009. Needless to say, Caty and Lynn have many accomplishments under their belts, and most importantly, a devoted relationship and supportive family.
Lynn walked into her son John’s tennis match at Ohio State University while telling me her story. I sensed the bond with her family — she cheered John on while we talked — and she showed a lot of determination.
Lynn says she and her husband (John Sr.) never thought their kids would play tennis. Then, at only 3 years old, here came Caty dragging along her racket and balls, “hitting on the wall” for hours at the tennis club where her mom taught. Caty began taking lessons and playing at age 6. By age 8, she was playing in tournaments. She grew up with it, and she began to love the sport. Now 19 years old, Caty made the decision to turn pro in 2019.
“In no way did we think our kids would ever play tennis,” says Lynn. “We weren’t expecting them to; we didn’t care if they did or didn’t. They wanted to play, and I would say they drug me out and we started playing as a family every Sunday night.” 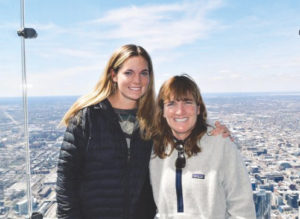 Family tennis nights expanded into dedicated involvement with tennis programs, to traveling to national-level tournaments. From there, John and Caty both built a path for themselves; Caty went pro after graduating from Madeira High School with a supportive team around her including Lynn, Caty’s main coach.
“I work with her all the time at home,” says Lynn. “I’m not in it for the sprint, I’m in it for the long hall for her.”
Caty currently has a WTA ranking of No.120 and WTA Doubles ranking of No. 44 in the world. In addition, she has won two doubles titles on the WTA tour (2019 Citi Open Championship; and 2019 Luxembourg Open Champion) with her best Grand Slam doubles result being Australian Open Quarterfinalist (2020, 2021) and her best Grand Slam singles result being third round of US Open (2020). Furthermore, Caty has defeated eight top 100 players and two top 30 players in her young career.
Asking how her mom’s coaching and support has influenced her accomplishments, she immediately talks about Lynn’s work ethic and willingness to do whatever it takes to be there not only as a coach, but as a mom for John and her.
“She works too much, honestly,” Caty jokes. “She works so much to support me and my brother and just even to get us to where we are. My dream one day is to have her with me at all these events. It just adds more fuel to my fire. She does everything behind closed doors, day-in-and- day-out, and I just want her along for the journey.”
Lynn separates her family and tennis life quite well, and how she sees her daughter goes well beyond her tennis accomplishments.
“Not only is she my daughter, she is doing something she loves which is important, but I want her not only to be a good tennis person, but a great person,” Lynn says passionately. “I would rather have Caty and John be good people than great tennis players. Because if you’re a good person, that’s something that can never be taken away.”
At the end of the day, family time is number one. Yes, tennis is part of their life, but it’s known that on the court, Lynn is her coach, and off the court, she is Mom — something they established from the get-go. Leaving tennis for the court and making time to unwind at home helps keep their relationship that much more valuable.

Top Coaching Tips for Any Parent

• Most important: have an open mind of communication. Hear the child.

• Never put the sport in front of your child.

• Give your child space.

• Everything you do, learn from it. Hopefully you can also talk about it!