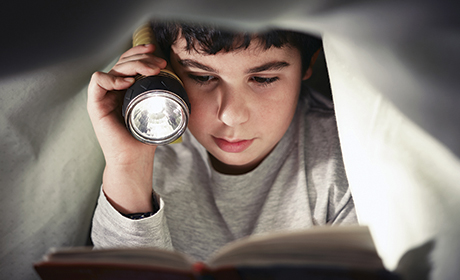 If it seems like your kids don’t read as much as you did when you were young, you might take note that technically, kids read more than we ever did. But text messages, e-mails, Facebook posts, and Instagram hashtags may not fit your idea of what counts as reading. But who says that Reading-With-a-Capital-R has to be from books alone? There are tons of ways to enjoy a good story, and in fact, alternative methods like audio books and e-readers might even help a non-reader.

Although research is still being conducted on how digital devices can help children with reading disabilities, a few small studies have shown positive results for kids using an e-reader. E-readers allow kids to do things they can’t in books, like adjust the font size to make it more comfortable for them, or show fewer passages on the screen so they’re not overwhelmed by too much text. Plus, fewer words on the screen means “turning pages” more often, so kids can feel like they’re reading more and faster, which inspires confidence.

Jeff Graham of the Langsford Learning Center points to audio books as a great tool for readers since they can introduce kids to new vocabulary. Audio books also provide critical listening and can help readers get past books written with dialects that might slow them down. Graham cautions against using audio books exclusively.

“Audio books have their place as an alternative method for accessing the contents/stories within books, but audio books are not a replacement for needed reading instruction, at any age,” he says.

NEW BOOKS ON THE WAY!

Need ideas for young readers? Check out this list of new books from Joseph-Beth Booksellers in Crestview Hills for upcoming fall titles sure to be a hit!

Crooked Kingdom
(Henry Holt; $18.99) a sequel to Six of Crows by Leigh Bardugo, author of The Grisha Trilogy.

Empire of Storms
(Bloomsbury; $18.99) the fifth book in the Throne of Glass series by Sarah J Maas.

Kids of Appetite
(Viking; $18.99) by David Arnold, the Kentucky author of Mosquitoland.

Spontaneous
(Dutton; $17.99) by Aaron Starmer, author of The Riverman Trilogy.

Stealing Snow
(Bloomsbury; $18.99) by Danielle Paige, author of the Dorothy Must Die series.

Swarm
(Simon Pulse; $19.99) the sequel to Zeroes by Scott Westerfeld.

Tales of the Peculiar
(Dutton; $24.99) a companion book to the Miss Peregrine series by Ransom Riggs.

Torch Against the Night
(Razorbill; $19.95) the sequel to Ember in the Ashes by Sabaa Tahir.