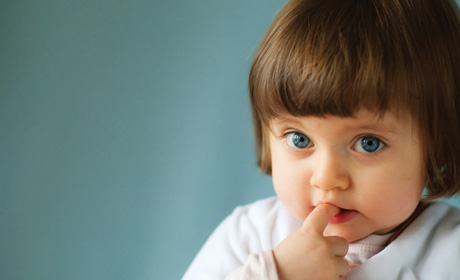 Researchers have been studying ways to diagnose autistic children at very young ages, even as young as 12 months, because an earlier diagnosis means more effective intervention. But is diagnosis at such a young age really possible?

“The quick answer is that it’s tricky under the age of 2,” says Patty Manning, M.D., Director of the Kelly O’Leary Center for Autism Spectrum Disorders at Cincinnati Children’s Hospital Medical Center (CCHMC). She explains that while it’s not uncommon for children younger than 2 to display signs of autism, they are often subtle and hard to tease out from other possible developmental delays. But your input counts.

“Parents are good screeners themselves,” she says. New parents can put a lot of energy into tracking their child’s progress when it comes to developmental milestones, especially in the first year of Baby’s life. It’s exactly that kind of close attention that doctors rely on. Doctors will use the Autism Diagnostic Observation Schedule (ADOS), which measures how a child communicates and interacts with others. A version for toddlers has been recently developed.

Most of the signs doctors look for have to do with delays in communication skills, both verbal and non-verbal. For example, a child who has poor eye contact, who doesn’t respond to his name, or who doesn’t engage in a back-and-forth sharing of sounds, gestures or facial expressions might be cause for concern. But Manning does point out that language delays at young ages are common, and many families are often referred to specialists to find that autism is not the problem.

If, however, autism is the correct diagnosis, intervention should be immediate. “The sooner you start, the better the outcome,” says Manning. Doctors first begin with speech therapy and occupational therapy for those with sensory issues. They will also use applied behavioral analysis, which are intensive, one-on-one sessions between the child and the therapist. For example, a therapist might sit across a table from the child and try to get him to imitate gestures, expressions or words. “Imitation is not a strong skill for kids with autism,” explains Manning. “Autistic kids learn very differently, and need more direct instruction.”

The P.L.A.Y. Project (Play & Language for Autistic Youngsters, playproject.org) is another form of intervention. “It’s less formal, but still intensive,” says Manning. Parents are instructed to get on the floor and insert themselves into the child’s activity in scheduled increments of time, for a certain number of times a day, all designed to develop a better connection through play.

The American Academy of Pediatrics calls for doctors to screen all children for autism at 18 and 24 months. But parents know their children best, and if you suspect your baby is facing autism or other developmental delay, don’t wait. Start by talking to your pediatrician about your concerns — the good news is that she has the tools to evaluate your child, even at a very young age.

Find Help Inside the Red Treehouse

The Red Treehouse is an online community for families with children facing serious illnesses. A partnership between Ohio Family and Children First (OFCF) and the Ronald McDonald House® of Cleveland, Inc., the site connects families with guides and tool-kits, resource groups, and a calendar of events for fun and learning. A search tool allows you to filter through the organizations to find the help you need with topics such as finances, legal or education. The site is available to registered users for free. Sign up at redtreehouse.org.