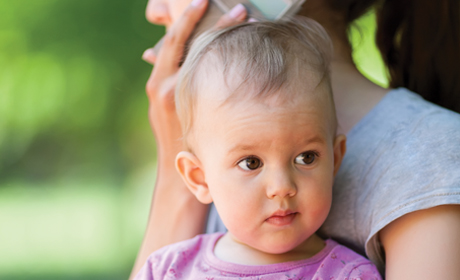 We all know that person who can’t seem to put down her phone — or maybe that person is you? While we make jokes about phone addiction, researchers are beginning to look at what it actually does to our brains — and to our kids’ brains — and local experts are voicing their concerns as well. In short, while long-term effects of a parent’s excessive cell phone use in front of the kids is not yet known, the inability to put down a phone sends a strong message to kids that may even affect their mental well-being. Donna Barasch, a clinical psychologist at Clinical Counseling Services of Cincinnati says that overuse of a smartphone around kids definitely has detrimental effects on their lives.

“The message to kids is that they are unimportant, and not top priority,” Barasch says. As a result, kids are likely to feel rejected, sad, angry and lonely.

Dr. Susan Steinberg, a clinical psychologist in Montgomery, says that kids may feel they aren’t as interesting to their parents as whatever’s happening on their phone. She adds that parents should be concerned about the long-term effects their excessive smartphone usage may yield.

“Kids model your behavior,” she says. When a 2-year-old sees Mom on the phone, she naturally wants to mimic her and use the phone as well. And even with a child-friendly app running, the American Academy of Pediatricians (AAP) says that can actually be bad for a baby’s brain development. Young minds require interaction with real people and objects to learn how to relate to other people and the world around them.

“Kids learn how to communicate and how important they are to us based on time together,” says Steinberg.

Long term effects of too much phone use around your kids may include low self-esteem and poor social skills, Barasch says including the inability to empathize with others. “They may not be able to connect on a deep, emotional level,” she says.

If you use your phone too much, how can you change that now? It’s not easy Barasch says, especially when you want (rightly so) to be available to older kids or an elderly parent  who may need you, or you have a lot going on in your work life, but it can be done.

“We can all come up with a schedule of how often we need to check e-mail,” Steinberg says. We can all learn to be more aware. And parents can figure out reasonable times for either silencing or putting away the phone altogether; during dinner, for example, at the playground, at bedtime, or in the car with the kids when they often need guidance. She suggests taking a moment to just think about how you actually hold your phone and experimenting with holding it in such a way that signals you are still open to a pleasant interruption — like a hug from your child. That has to be better than any text message!