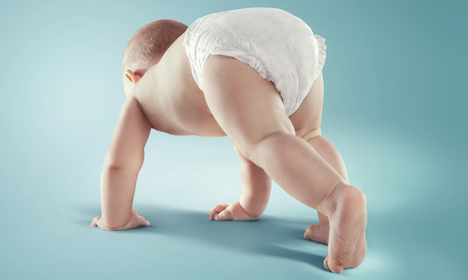 “Perfection.” That’s what Chelsea Myers says of baby feet. When her son was born she remembers measuring his whole foot against her thumb. There is just something about baby feet that we all love. Mom Emily Czerwonka says they “make us think of all the miles we’ve walked,” while Sue Duty says she “wonders where those little feet will take them.”

Our feet carry us around for a lifetime, making it important for parents to pay attention to their baby’s feet from day one.

Dr. Cynthia Miller, a podiatrist at the Family Foot and Ankle Center says, “Many adult foot problems have root in childhood.” They may look like small, adorable versions, but Miller says, “Children’s feet are fundamentally different from adult feet — they’re not just little grown-ups.”

Feet affect the rest of the body. Miller says, “Limping, tripping frequently, poor posture, an awkward or unsteady gait — all of these problems could be related to an untreated foot condition.”

If you suspect there’s something off about how your child is developing, don’t overlook his feet as a possibility.

Children grow so quickly it seems you blink and they need a larger shoe size. But the right fit is important. The good news is, parents shouldn’t even buy shoes for infants. Until your baby is walking on his feet he shouldn’t wear them. Even then, if his feet are developing normally, save the shoes for outside.

“When they’re still young, children’s feet are composed of soft, flexible cartilage and any footwear on a fast growing foot, even booties, can quickly prohibit normal growth and development,” Miller says.

When it’s time for shoes, check the fit often. Dr. Caron Harner, another podiatrist with the Family Foot and Ankle Center, says

to “measure to the longest toe, not the big toe.”

Many times the second toe is the longest toe on the foot, but parents fit their child with a shoe based on the position of the big toe. Harner warns “this can cause hammer toe in the longer, second toe.”

Two-year-old Ezra has a wide, flat foot. His parents keep a close eye on his feet because flat feet run in the family. Babies’ arches don’t start appearing until after age 2. Even then, you may see an arch while they’re sitting only to see it go flat when they stand. This is normal.

Babies start out walking by planting their whole foot. Sometime after age 2 they will start walking in a heel-to-toe fashion. This is when the arch will begin to develop.

“If you notice the child is not getting an arch, especially if there’s a family history, have him examined by a podiatrist so he can get him into orthotics right away,” Harner says.

Orthotics will help recreate the arch.

Unless a child is in pain, no other treatment beside orthotics are needed as they grow. However, if the child is complaining of pain or shying away from physical activity, especially between the ages of 11 to 14, he may need more attention. At this age the growth plate is beginning to close and it can be painful, particularly for flat-footed children.

Tenderness while the growth plate in the heel is closing is called Sever’s Disease and it is the most common reason for heel pain in children.

“Sever’s happens when a tight Achilles’ tendon tugs on the growth plate,” according to Harner. Kids with flat feet are more susceptible. However, overuse and injury are possible causes, too. Other growth plates exist in the foot, but problems with the growth plate in the heel are most common.

Nine-year-old Riley is a competition gymnast. Her heel pain can kick up in practice. Ibuprofen can help, but it can still become more painful. Riley was diagnosed with Sever’s disease and wore a boot all summer.

Intoeing, or what is known as “pigeon toe,” is commonly seen in children up to age 8. Harner says that it’s usually not addressed because a lot of kids grow out of it.

Zoe’s mom first noticed her intoeing around age 2. Zoe had been walking for about a year and one foot seemed to be worse than the other. Her pediatrician, Dr. Philip Lichtenstein, checked Zoe’s feet, hips and gait. They monitored her progress. Lichtenstein told Zoe’s mom that pigeon toe isn’t always a problem. He even reassured her that many successful athletes are pigeon toed.

Harner Agrees. Her son is pigeon-toed and she does nothing to try to correct it because there’s no pain or discomfort. Harner says, “Parents may notice it more when they buy the next size up in shoes because the tripping will temporarily get worse as they get used to the bigger shoe.”

Intoeing — or it’s opposite known as out toeing — is caused by a difference in either the foot, tibia or femur. It can also be a combination of all three.

“The more severe the deformity, the more the patient will complain of pain, swelling or have trouble with tripping,” says Harner. Previous generations fitted children with braces for intoeing and out toeing but not any longer. No intervention is necessary unless it is painful or swollen.

Zoe is a teen now and an accomplished swimmer. Though she never outgrew her pigeon-toed stance, it only affects her ability to swim the breaststroke. Her feet can’t get into the toes-out frog position. She swims the butterfly and backstroke with precision.

Cayden’s clubfoot could be seen on his mother’s ultrasound and his first surgery was scheduled before he was even born. Clubfoot is the most severe of the common foot ailments that can happen in childhood and Harner says it’s usually caught on the mother’s ultrasound.

About one in 1,000 children are affected. Genetics play a role, but it can also be caused by the baby’s position in utero — the positions of the legs. The good news is that usually the child is otherwise healthy. Severe cases like Cayden’s require surgery.

“Many babies have success using the Ponsetti method. This treatment uses stretches and casting to gradually change your baby’s feet into a normal position,” Miller says.

“They usually start serial casting right away,” Harner says, if the foot differences are severe. Once or twice per week, the doctor will remove the cast, reposition the leg, and recast. After the foot has been repositioned, stretching exercises, special shoes and bracing are used to prevent the clubfoot from returning.

“Although this method requires a high level of commitment from parents, it is highly effective when followed faithfully,” Miller says.

There are many different variations of clubfoot. If the clubfoot is more rigid, Harner says serial casting may not work. This is when surgery is required, which is the case with now 9-year-old Cayden who is preparing for his fifth clubfoot surgery.

Wherever your little one’s feet may take him, it’s your job to make sure he starts off on a healthy foot.