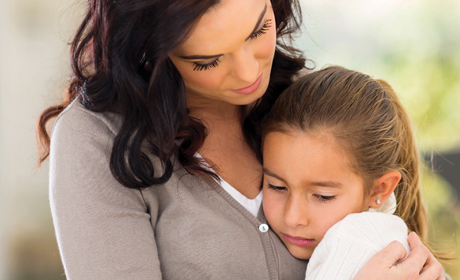 My 13-year-old son Joey often cries himself to sleep or wakes up with nightmares. The littlest things cause him to worry. He often chooses to hang out by himself in his room instead of socializing with others. He’s extremely sensitive and sometimes moody. Joey suffers from Post-Traumatic Stress Disorder, or PTSD.

People typically think of soldiers who have been at war, or adults who have been through traumatic events as typical sufferers of PTSD, but Richard Gilman, Ph.D., Professor at University of Cincinnati Medical School and director of clinical services and training at the UC Stress Center, says children are often victims as well.

At age 10, Joey was diagnosed with Langerhans Cell Histiocytosis, a rare disease that caused his white blood cells to attack and eat his hipbone. He had to have a bone graft, spent months in a wheel chair, years in physical therapy, and lots of follow up testing. Doctors have assured him that it won’t return but he still fears it will. Since he has met families who have lost a child to LCH, he also worries he could die.

Gilman said children who have been exposed to a life threatening situation, sexual assault, a car accident or a serious injury are at risk of suffering from PTSD. Those who have witnessed trauma might also suffer. “Children are no different than adults in experiencing many forms of trauma,” says Gilman. “It could be a number of things.” He explains that trauma’s a loss of control in some way. “PTSD is caused by the unknown; is this going to happen again? They over accommodate and feel the need to be in control of everything.”

He adds that victims of PTSD see the world as dangerous, think they will never get better and often blame themselves and question what they could have done differently.

IT’S NOT THEIR FAULT

Sean, a 14-year-old who lives in Northern Kentucky, also suffers from PTSD. His biological mother was a drug addict. When Sean was 3, they were living in a motel with his mother’s boyfriend who was running from the police. The boyfriend sliced his own throat in front of Sean and then his mother left Sean in the hotel room while she took the boyfriend to the hospital. The police were called and Sean was put under the care of social services until he was placed with a foster family four days later.

Although he started therapy immediately, he was diagnosed with PTSD. “The signs for Sean were extreme night terrors and obsessive compulsive disorder,” his adoptive mother Beth says. “OCD comes out because Sean is desperate to control his environment after being traumatized. He stayed in the care of a therapist for about six years. Since it happened at a young age and he has had stability for many years, the symptoms have mostly subsided. He still has night terrors on occasion, but doesn’t remember them. Obviously therapy helped, but we also gave him structure and safety.”

By providing Sean with support and access to help from the professional mental health community he is now a vibrant teenager succeeding in sports and school, she added.

A mental health specialist with Mebs and Associates said a thorough assessment of the patient in question is required, which includes a full health history of the child and immediate family members, as well as the child’s social environment and behavioral history. “The process is very detailed, as it is important to make the best diagnosis possible in order to treat appropriately,” she says. “PTSD can mimic other mental health diagnoses such as anxiety, depression, substance use disorder, therefore all options must be considered prior to making a final diagnosis.”

Emily, 13, and Evan, 11, from Ohio, lost their younger sister to LCH, the same disease Joey has, when she was only 2. Emily and Evan were 7 and 5 years old at the time and although they were not diagnosed with PTSD, they did suffer from anxiety. “We did lots of art therapy and music therapy to help us heal,” their mother Laura says. “Both Emily and Evan had a difficult few years. I would recommend keeping as normal of a schedule as possible. We created weekly Wednesday ‘Ellisyn Nights.’ We played games and talked about her and questioned maybe what she was doing in heaven that week. I think attending group counseling or some form of art or music therapy can be beneficial for siblings that have lost a brother or sister.”

Melissa* says her son Tim* was 5 when he was molested by a family friend. He started showing signs of aggression a few months after the trauma. He got into fights at school and purposely disobeyed his teachers. He wouldn’t do what he was supposed to at home either. Melissa also noticed her son would act out what happened to him with his toys.

“It was gradual at first,” she says. “I had him in counseling from the time we discovered what happened. At first I let him get away with misbehaving because of the guilt I felt. But I realized I was doing him a disservice. He needed structure and to feel safe.”

Gilman says concerned parents should contact their pediatrician, the Mayerson Center for Safe and Healthy Children, the University of Cincinnati Stress Center, the behavioral management team at Cincinnati Children’s Hospital Medical Center, or a trusted certified counselor, psychologist or psychiatrist. He recommends Cognitive Processing Therapy for those dealing with PTSD.

“With cognitive processing therapy, individuals learn they can’t change the event,” says Gilman. “You change your thoughts around the exposure to the trauma. It changes the whole way they look at themselves, their future. It used to be thought that PTSD could not be cured. Individuals who would come for talk therapy were finding that is not useful. In order for the individual to recover you have to change the way you think about the trauma.”

Gilman says that talk therapy enforces avoidance but cognitive therapy forces victims to work through and modify the way they deal with the trauma. “There are two types of cognitive therapy — exposure and processing. With exposure, the individual is repeatedly exposed to reminders in a very safe environment and works through it. Processing therapy is not exposure based. It is more dealing with the underlying thoughts,” he says.

Melissa says therapy at the Mayerson Clinic helped her son quite a bit. “They helped my son realize it was not his fault and he is safe now.”

I didn’t notice signs of PTSD in Joey until almost a year after the original diagnosis, which Gilman says is normal since most people don’t feel the impact of PTSD until at least a month after the trauma occurs. Looking back, I see that it happened gradually. Joey was focused on his recovery, including being able to walk again. Once he started to be physically okay, he was able to mentally process what had happened to him. That caused anxiety, then nightmares and uncontrollable crying. “There was a tangible goal to reach,” Gilman says. “Now that the goal is gone there is the undercurrent of ‘what if this happens again.’”

Joey deals with lot of unexplained pain, which makes him fear that the LCH is attacking again. He worries himself sick about it. He immediately starts replaying the diagnosis, the surgery, the pain, the time in a wheelchair, therapy and missing out on school and normal things in his mind. He worries over things that have nothing to do with the incident, like will our dog get loose and hit by a car. It impacts his school work. If he misses school due to pain or being sick, he worries about having to make up that work. Joey sees a psychologist and psychiatrist and is being treated with medicine. We constantly reassure him that he’s going to be okay. After speaking with Gilman, we plan to explore cognitive therapy so he can learn to think about his trauma differently.

Gilman said there is no way to prevent PTSD or know if a child will suffer from it but suggests parents try to communicate a sense of safety after the event occurs. “PTSD itself is a physiological disorder. There are changes in the brain that occur well after the trauma. Parents can’t prevent PTSD. They can keep an eye on it and get help. PTSD can be treated.”

*Names have been changed.

Gina Stegner is a local writer and mom.