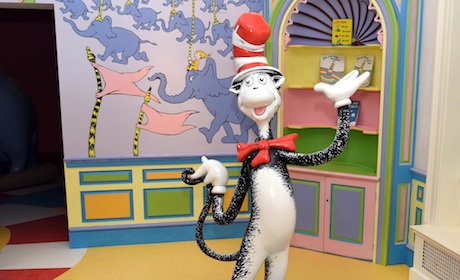 Hear a Who with Horton. Count One Fish, Two Fish, Red Fish, Blue Fish and join Sam I Am for make-believe Green Eggs and Ham at the Amazing World of Doctor Seuss.

Last month, Springfield, Massachusetts (the city where Seuss was born), opened the doors to the world’s only museum dedicated to the beloved creator of Yertle the Turtle, the Grinch, Thing 1 and Thing 2, and countless other weird and wonderful characters. 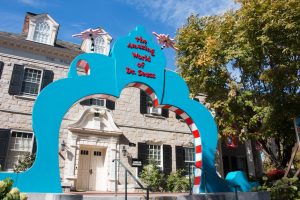 Visitors enter the museum beneath a Whoville inspired archway into the William Pynchon Memorial Building, a two-story stone-block Georgian colonial. On the fully interactive first floor, murals from Dr. Seuss’ books cover the walls (coated with polyurethane for easy clean up). Among the oversize figures of Seuss characters, children and adults enjoy literacy-based fun. In both Spanish and English, parents and children play rhyming games, invent stories and think creatively using the latest innovations in interactive learning.

The second floor recreates the studio where Ted Geisel, the real name of Dr. Seuss, created his stories and illustrations. Geisel’s stepdaughters Lark Dimand-Cates and Leagrey Dimand donated memorabilia including his collections of crazy hats and more than 100 whimsical bowties.

“I emptied my house,” Dimand told reporters. The yellow walls replicate the color of Geisel’s studio in La Jolla, California, and surround his couch, drawing board, and the trunk he carried throughout his trip to Peru. Along with stuffed animals and favorite books, the museum displays oil paintings, drawings, sculptures and Geisel’s illustrated notes. 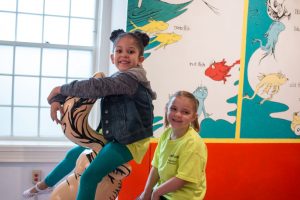 Geisel’s fame began with 1957’s The Cat in the Hat, but that story was actually his 15th published book. His first was And to Think that I Saw It on Mulberry Street, which was inspired by childhood memories of the real Mulberry Street, just blocks away from the Springfield museum. In total, Giesel wrote and illustrated 44 children’s books, helped produce numerous film and TV programs, and won two Oscars, two Emmys, a Peabody and the Pulitzer Prize.

The works of Dr. Seuss not only teach and delight, but also inspire, and occasionally address social issues. The value of every individual can be seen in the repeated line “A person’s a person, no matter how small” from 1954’s Horton Hears A Who. The evils of discrimination appear in The Sneetches and Other Stories (1961), in which a group of Sneetches with stars on their bellies mistreat Sneetches without stars. Additionally, The Lorax (1971) addresses pollution and the importance of caring for our environment.

OTHER MUSEUMS AROUND TOWN

The Amazing World of Dr. Seuss joins four other museums in downtown Springfield, Massachusetts, all accessible for a single admission price. See great art, including the works of Winslow Homer, Georgia O’Keeffe and Claude Monet at the Michele and Donald D’Amour Museum of Fine Arts. See the impressive collection of paintings, Islamic Art, and Asian decorative art, weaponry and armor at the George Walter Vincent Smith Art Museum. Discover the early days of Springfield at the Lyman and Merrie Wood Museum of Springfield History, with its Springfield-built Indian Motorcycles, Rolls-Royces, and Smith & Wesson firearms. Learn through interactive exhibits at The Springfield Science Museum, and see its live animals, dinosaur skeletons, and planetarium. And finally, enjoy the Dr. Seuss National Memorial Sculpture Garden, featuring sculptures of some of Ted Geisel’s most beloved characters created by his step-daughter, Lark Dimond-Cates.

IF YOU GO: THE AMAZING WORLD OF DR. SEUSS MUSEUM

General Admission (includes all four museums and the Dr. Seuss

VOTE IN THE BEST OF PARENTING! 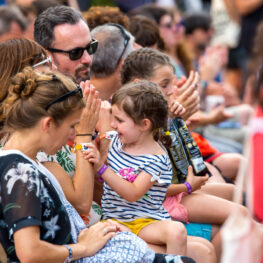 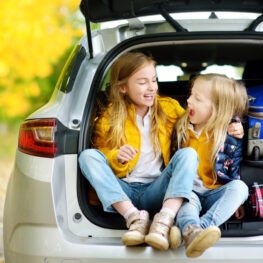 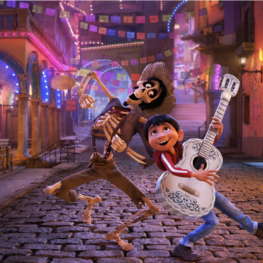 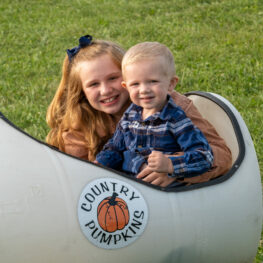