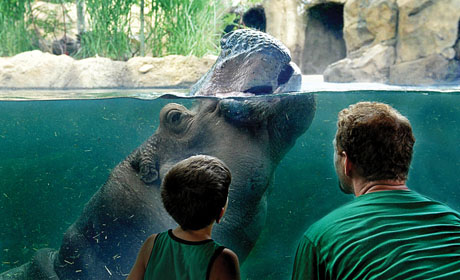 Gradually, my sons and I inched through the crowd, and finally edged into a spot in front of Hippo Cove’s 70,000-gallon pool. For several seconds, maybe minutes, we could only see fish, which are there, the Zoo guide said, to eat the waste of the hippopotamuses. Then, someone shouted, “Here he comes!” and 4,000 pounds of hippo glided by — its tiny hind leg stumps looked incapable of holding its massive body. Then its head surfaced. Its cute rounded ears, eyes and nose give little hint of the animals’ known ferocity, which we witnessed, on a minor scale, as the hippo bumped into its companion, and the two bellowed at one another.

Hippo Cove, the newest exhibit at the Cincinnati Zoo and Botanical Garden, houses two hippopotamuses — Henry, a 34-year-old male, and Bibi, a 17-year-old female. Wendy Rice, the Zoo’s head keeper of the Africa exhibit, says that Henry and Bibi have already become friends. “The two have now been fully introduced and all indications suggest that they’re compatible and happy to be with each other.”

Kids are happy in the recently completed Africa section, too. In the new play area, kids can climb on rocks and hippo statues, try out a ropes course and learn through interactive activities. Additionally, within the exhibit itself, there’s a special viewing window close to the ground just for kids; there’s another cool window nearby in the meerkat exhibit. As we watched the playful animals, we continually heard boys and girls call out, “Oh, I want to go in that!” as they pointed to a bubble window in the midst of the exhibit at eye level with the meerkats.

From Africa, we followed paw prints to more of the Zoos’ 500 animal species — trekking active gorillas, resting tigers, pacing mountain lions and graceful manatees. Along the way, we touched a dragon, saw snakes and watched the baby giraffe run to its mother. Meanwhile, my boys took selfies, shared their pictures with the Zoo’s new WiFi network and caught Pokémon. “What could be better? Animals and Pokémon!” my youngest said, also noting that there are 26 Pokéstops and two gyms. His older brother added, “They’re different Pokémon, too.”

In a shady picnic area, they compared their catches as we relaxed at a table, glad that the Zoo actually allows visitors to bring in coolers with soft drinks and snacks. While we ate, I admired the lush flowers and surrounding bamboo forests, just a few of the 3,000 plant species in the Zoo’s botanical garden. We also noticed strings of Christmas lights tucked among some of the beautiful foliage. The Zoo uses nearly 2 million lights for its spectacular Festival of Lights in the Winter. The holiday event runs Nov. 19, 2016 – Jan. 1, 2017, and will feature a new Wild Light show on Swan Lake, performances by Madcap Puppets and visits with Santa.

This month though, the Zoo presents its annual HallZOOween. On Saturdays and Sundays from Oct. 8 – 30, kids 12 and younger can dress up and trick-or-treat throughout the Zoo, while searching for a golden Big Boy statue. Two of the iconic figures are hidden each day, and the lucky finder wins a prize package valued at $150. Additionally, Phil Dalton’s Theater of Illusion will perform magic in the Wings of Wonder Theater, and the Zoo will offer special animal encounters and Halloween animal meet and greets. 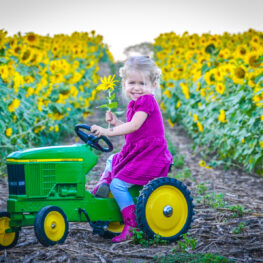 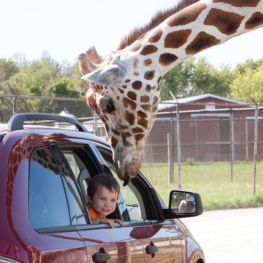