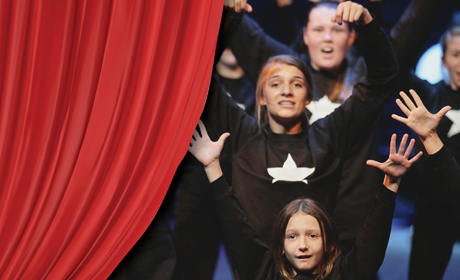 Kids and theatre make for a great combination, whether they want to perform on stage, or enjoy from the audience.

Children are naturally great performers. They sing, dance, have a wide range of emotions and they have absolutely no trouble projecting their voices. When a little one expresses a serious interest in getting on stage to perform, there are several steps you can take to get them ready. Here are tips from the pros on introducing children to the wonderful world of acting:

Seeing a show is a great way to gauge whether or not a child has a serious interest in performing. If a child seems like a natural performer, introduce them to stage productions at a young age. Angela Powell Walker, artistic director of The Children’s Theatre of Cincinnati, says, “Bring your children to the theatre as early as possible.” It’s a good idea to choose age-appropriate shows in a variety of venues to test a child’s interest levels. Walker says, “Each parent knows their child and if they can sit and concentrate for a period of time.” Start out with a show that the child might be familiar with or has a special interest in. Then, once a child is comfortable with the theater experience, expand their horizons with unfamiliar shows or musicals.

There are many opportunities coming up to observe a kid friendly show in Cincinnati, including Acting Up’s presentation of Guys & Dolls at Mason High School Theatre, Sept. 25 – 27; The Children’s Theatre of Mason’s production of Les Miserables (recommended for ages 10 and older), also at Mason High School Theatre on Oct. 16 – 18; and The Children’s Theatre of Cincinnati’s production of Disney’s Little Mermaid JR. at the Taft Theatre, Oct. 16 – 18 and Oct. 24 – 25.

Budding actors will need a resumé and a headshot prior to auditioning. Resumés must include basic information like the child’s name, age, height, weight, hair color, eye color and contact information. It should also include their hobbies, talents, any classes they have taken and any productions they have previously been involved in. Laura Peebles, president and board member of Acting Up, clarifies that any clear photograph of the child will do the job. “If we see 150 kids in the audition process, we just want a headshot that is clear and recognizable when we are making final selections.” For beginning actors, a simple photo will do for the headshot. Peebles mentions that even a class photo will do!

No matter what type of acting a child is interested in, it is a good idea that they take classes to ready them for their roles. Vocal, dance and theater classes are options that can be taken at school as an extra-curricular. Children can also take classes outside of school or participate in theatrical themed summer camps. Many acting organizations offer year round workshops and classes to hone particular skills in children; visit the “Classes” section under Directories for local classes in the arts.

There are several auditions held each month for children’s roles across the Tri-State. It is extremely important to treat each audition as a unique experience, and to prepare for it accordingly. A great resource to utilize for auditions is cinstages.com. Different productions require different types of auditions. One audition may ask for an acapella performance, while another requires a musical accompaniment. One audition may ask for a monologue, while another requires a cold reading. Each audition description will clearly state what they want in a tryout, so make sure to prepare what is being asked.

“No” is part of the business.

No matter how prepared or how talented a child is, they still might not be what the producers are looking for in a particular show. Sadly, all actors will hear “no.” Rejection is part of the theatrical industry, and how a child handles the “no’s” can define his career. Karen Kilgore, president of The Children’s Theatre of Mason, notes that “there are a lot of no’s in this industry, which makes the yes’s that much more rewarding” and that “every audition is subjective. The team has a vision; an actor can be extremely talented and still not get cast.” For that very reason, it is important to encourage young actors to not take rejection personally. Kilgore reassures young actors by reminding them of all the opportunity for auditions in Cincinnati.

Once a child is cast in a production, an official rehearsal schedule will be released. Smaller roles for younger children may only require two to four hours of rehearsal per week, while larger roles for older children may require up to eight hours a week. Artistic Director of the Children’s Young Peoples Theater, Tim Perrino, compares the dedication to a production to that of being on a sports team. “It’s a big commitment where the success of the venture requires talent, enthusiasm, good coaching and a dedication to teamwork on the part of everyone involved,” he declares.

When a child is dedicated to acting, the rewards of performing in a theatrical production are bountiful. Performing will help a child develop a sense of pride and confidence. It will also introduce them to a diverse group of individuals they might not meet otherwise. The camaraderie and sense of family established during rehearsals of a show are memories a child will cherish for a lifetime.

If a child is interested in performing on the stage, look into these area children’s acting organizations:

The Children’s Theatre of Mason
513-398-0116 | childrenstheatreofmason.com

Making it Big: Getting an Agent

For Tri-State children who would like to be on the big screen, obtaining an agent is a must. There are many local agencies to check out, one of which is Katalyst Talent Agency. Katalyst boasts such talents as Ciaro Bravo (Big Time Rush, The Frankenstein Code) and Galadriel Stineman (Ben 10: Alien Swarm, The Middle). Kat McEntee, owner and agent of Katalyst, states that children as young as 4 can get signed. “Talent is what we look for. But even more important is an engaging personality and a good attitude,” she says. Children do not need previous acting experience to secure an agent; they can simply submit a virtual audition online. In fact, once a child is signed to a local agent, they can even audition for national projects through video recordings or Skype.

Along with securing an agent, child actors wanting to book the big gigs will also need to participate in acting classes or secure an acting coach. One such organization that offers personalized coaching is Gray Studios, which coaches more than 40 percent of actors on television today. Gray Studios is an LA-based studio that accepts talents based on agency referrals. They work with actors that have agents in Cincinnati through local group classes and individual coaching sessions. Owner Shanelle Gray states that “the business has opened up with on-tape auditions.”

Cincinnati kids can make it in Hollywood! Check out these Cincinnati organizations for children wanting to be on TV or in movies: