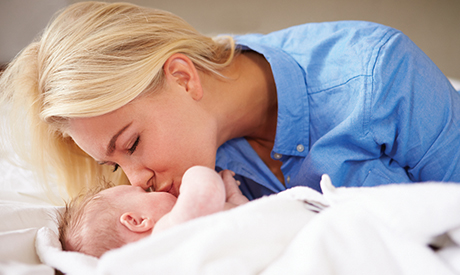 How much do you know about infant development? Learn what your baby can and cannot do as she grows.

The baby’s crying – again. What can it be this time? Didn’t you just change her diaper? Wouldn’t it be nice if she would sleep through the night already? If she ate on a regular schedule three times a day, maybe you could do what you had planned for today – like getting a moment’s rest!

It would be nice sometimes if babies mastered certain skills just a little quicker. However, in our on-demand culture with expectations for instant access and instant response, we can sometimes forget that some things can’t be rushed. One of those is infant development.

Unfortunately parents often don’t know they are rushing their babies because they do not know what a baby can do at different ages. The gap between what a baby can do and what the parent wants her to do can create a cycle of impatience and frustration, leading to problems later in childhood.

What Do Mothers Know?

Stephanie Reich, M.S., an expert in child development and a doctoral candidate at Vanderbilt University, has studied mothers’ knowledge of infant development. “We are trying to create innovative ways to educate mothers about typical child development. In order to do this, we need to figure out which areas mothers know a lot about and which ones they might need more help with,” says Reich.

In her study, researchers surveyed 203 mothers and mothers-to-be at two Vanderbilt University Medical Center clinics. The women answered questions based on the Bright Futures Guidelines for Health Supervision (see sidebar “How Much Do You Know?”) and rated the age at which a baby could accomplish certain tasks.

“The moms answered about two-thirds of the questions correctly,” explains Reich, whose study will be published in the March 2005 issue of Infant Mental Health Journal. “They tended to do better on the importance of establishing routines and their own health after birth than on questions about babies’ sleep needs and the abilities of a 6-month old.”

Babies younger than 3 months old normally wake up every three to four hours. Although exhausting for parents hoping to get a full night’s sleep, young children have small stomachs and need food that frequently.

Talking to mothers in the study revealed some added cereal to the baby’s bottle, against the doctor’s advice, to help baby sleep longer. “The baby may sleep longer but is in gastric distress,” says Reich. “Before 4 months of age, babies do not have the necessary enzymes to digest complex carbohydrates like baby cereal.”

Of special concern though, was that mothers tended to overestimate an infant’s skills. Research has shown overestimation can lead to poorer quality parent-child interactions and that abusive parents tend to have more unrealistic expectations of their child’s abilities. When the child fails to meet those expectations, the parent may become frustrated and aggressive or withdraw from and neglect the child. Even in less extreme cases, behavioral problems like aggression can become more common in later childhood.

“There is a tremendous amount of research supporting the relationship between poor quality parent-child interactions and children’s externalizing behaviors. Studies are now exploring whether the dynamics of how parents and children interact begins early, such as in infancy,” says Reich.

Development means more than just where the baby ranks on height and weight charts. During infancy she learns many distinct skills as stepping stones to more advanced abilities like walking, talking, reasoning and independence.

Babies emerge with all of their senses functioning. Although vision is the least mature sensory system at birth, newborns can see as far as 12 inches and prefer seeing human faces. Providing objects with highly contrasting colors is visually interesting and cognitively stimulating to infants.

Similarly, babies hear quite well. They distinguish their parents’ voices from others shortly after coming home, if not sooner – some recognize their mother’s voice in the womb. Although it will take almost a year for babies to speak, talking, reading or singing to them helps them understand a broader range of words.

Babies’ physical and intellectual skills take more time to develop though, and misjudgments of these skills can lead to problems. “Research shows that parents typically underestimate physical capabilities and overestimate their behavioral and cognitive skills,” says Reich.

Babies often master physical skills before parents expect them. Finding the baby on the floor after rolling off the bed is not the best way to learn baby can rollover.

On the behavioral side, adults take for granted their own reasoning skills. For example, a parent might punish a 9-month-old for throwing a toy at a sibling. However, the baby is too young to make the link between her actions and how it will make someone else feel or what they have done and the punishment. This makes active responses, like spanking, and passive ones, like reasoning with the baby, poor choices.

“They’re not yet capable of understanding that the one has anything to do with the other,” says Reich. Instead, parents often have success simply by saying “No” and distracting the baby with another activity.