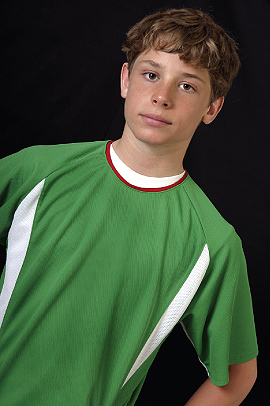 They go by nicknames like ‘roids, juice, Arnolds, pumpers, stackers and gym candy. But there’s nothing sweet about them.

Anabolic steroids are basically hormones that are the same as or perform like the male sex hormone testosterone once reserved for the likes of Jose Canseco, John Rocker, Barry Bonds, Arnold Schwarzenegger, Floyd Landis and Sylvester Stallone.

Today, steroids are making headlines for making their way into the lives of middle school and high school kids across the country. In fact, somewhere between four and 12 percent of teens are currently hooked on them.

Exercise physiology expert Dick Storie is the founder and owner of SportsDiagnostics and has spent 25 years testing amateur and professional athletes such as Lance Armstrong, the Nashville Predators, the New York Islanders, Pittsburgh Pirates, Buffalo Bills and various Olympic competitors. Storie says seventh and eighth graders are early targets for steroid addiction while high school kids are the big target. But he says there is documented research revealing that kids as young as 7-years-old have been exposed to steroids.

Drew Massey – wellness director of the Maury County YMCA, certified personal trainer and former strength and conditioning coach for the Austin Peay State University football team – puts it bluntly, “Don’t be naive and think that your 14-year-old hasn’t been exposed to steroids. He has.”

Steroids hyper-stimulate the body to produce muscle proteins, creating abnormally large muscles. When they’re taken in conjunction with frequent weight lifting exercises, a normal muscle can grow to the size of a coconut or grapefruit … just look at professional wrestlers, the front line of any NFL team or the cover of Muscle and Fitness magazine to see a perfect example. Other performance enhancing drugs include Human Growth Hormone (HGH) and thyroid hormones. There are also so-called blood builders, used by runners, cyclists and swimmers. These drugs claim to increase a person’s red blood cell count, thereby allowing them to use oxygen more efficiently and increasing endurance.

One of the reasons steroids are becoming increasingly popular among kids is because they provide quick results. Young men get the big biceps they crave, while both boys and girls see rapid improvements in endurance, strength and muscle mass.

Like most illegal drugs, they’re addictive. Users report hallucinations, paranoia and severe mood swings. Jeff Rutstein, a former steroid user and author of The Steroid Deceit: A Body Worth Dying For (Custom Fitness, $12.95), says, “Your body craves it. You’re shooting testosterone, so your body shuts off its normal hormone production.” And without the drugs, a body desperately needs the dose of chemicals it’s become used to.

The price of coming off steroids is often a debilitating depression that can result in suicide. A congressional committee on steroids recently discussed the deaths of three teen athletes who killed themselves after quitting performance drugs.

“A friend of mine came off steroids and hung himself,” recalls Rutstein, who started shooting up anabolic steroids during his freshman year of college. “When I came off, I thought rats were flying out of my head. I was so depressed that I couldn’t get out of bed for a year.”

So the Question is Why?

Although athletes are at the greatest risk for steroid use, adolescent boys with the normal desire to look bigger and stronger get drawn into them, too. Just as some girls turn to anorexia to achieve the skeletal thinness glorified in fashion magazines, boys use steroids to get the disproportionately large physiques of pro athletes and action heros they see on television. Rutstein wasn’t an athlete. He was a guy who worked out at the school gym and wondered why he wasn’t getting the same results as some of his buddies. So they turned him on to their secret weapon – steroids.

Like Rutstein, most kids learn how to get and use steroids from other users. It may be a big brother, a teammate or an acquaintance at the gym who says he knows of a great “supplement” that will help a guy bench more weight.

Some of the drug pushers are coaches, trainers and even parents hoping to give their child the winning edge in youth sports. Storie says, “I see coaches who care more about winning than the child’s health. I have lots of parents come in here who ask about how to get steroids, to just ‘take a little bit’ so their child can earn a scholarship. The parents subtly and openly pressure their kids. It’s a sad manipulation.”

They’re easy to obtain, too. Type the word “steroids” into any search engine and you’ll find links to foreign pharmacies in Mexico and Thailand that will ship an unlimited amount of drugs to anyone with a credit card number. But most kids don’t have to go that far. Other users need to sell steroids to support their own habits, so a few quiet inquiries around the locker room is all it takes to find a dealer.

Rutstein, Massey and Storie all say the key to anabolic steroid prevention is education. Parents can read books like Rutstein’s with their kids to show them how debilitating and deadly these drugs are. Coaches should stress that illegal supplements are cheating and can destroy an athlete’s career as well as his body. Dads can point to the covers of muscle magazines and tell their young sons that the guy with the basketball-sized biceps also has testicles the size of grapes because of steroids.

Here’s some good news: Williamson County Schools have a program called Atlas and Athena that educates student athletes about the dangers of anabolic steroids, as well as proper nutrition and training techniques to achieve their goals safely and naturally.

Dianne O’Neil, the Safe & Drug-Free Schools Coordinator for the Williamson County Board of Education explains that team captains and squad leaders of both genders attend classes that cover drug prevention, exercise and weight training and nutrition. They then go back to lead small group education seminars with their teammates, so kids get this important information from a respected peer leader.

The Atlas and Athena program has been so effective that it’s gained national recognition and recently received $1.2 million in funding from the NFL Players Association. Here in Middle Tennessee, coaches and students will actually attend the training at the Tennessee Titans training facility where Titans Strength and Conditioning Coach, Steve Watterson will speak about the benefits of proper training versus the dangers of performance enhancing drugs.

If a child shows athletic potential or just wants to develop a stronger physique, Massey recommends, “take them to a certified trainer to get the professional development they need. A trainer can develop a safe, effective strength and conditioning program designed to achieve optimum performance.”

Just make sure to do your homework first. Storie says that a good trainer will want to know a client’s complete medical history and take a detailed strength, flexibility, endurance and skills assessment to pinpoint weaknesses and tailor a program for that individual. He cautions against trainers and companies that put kids of all sizes, abilities and experience in the same pre-season sports drills.

A rapid and sudden increase in body size, stretch marks, severe acne on the back and buttocks and secretiveness regarding teammates, gym friends and workout schedules are all signs of steroid use. Increased moodiness and aggression is also a common red flag. Storie says, “It’s difficult to separate from typical teenage behavior, but it’s inappropriate aggression like shouting and anger.” Massey says, “Anger when you set a curfew is normal teenage stuff,” but suspect steroid use “when your kid starts popping off because dinner isn’t on the table at six o’clock.” Steroid users are proud of their new bodies and will often wear tank tops or tighter t-shirts to show off.

A parent who suspects their child is using anabolic steroids should contact a physician or organization that specializes in drug abuse. Rutstein says, “Coming off cold turkey is dangerous and potentially deadly. Get help from someone who deals with addiction.”

Deborah Bohn is a local mother and writer.