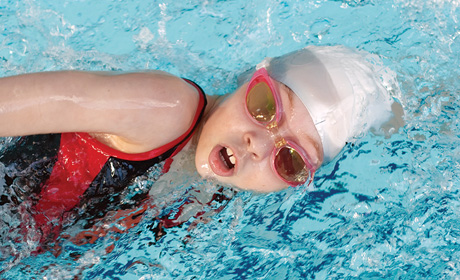 Signing up for sports, especially if your kid has the talent to play at a more competitive level requires a big commitment — of time, money, and heart. Parental involvement is key, but what does that really mean? We talked to a few coaches and parents to find out what makes for a great coach, and how parents can help support and cheer on their kids.

If there’s one thing everyone involved in kids’ sports can agree on, it’s that few things in childhood are better than playing with a great coach. Sometimes a kid and his coach just “click,” and the rewards are great — improved athletic skills, sure, but also an improved sense of confidence in one’s ability, on and off the field. How to find that coach who inspires kids to great heights? Better yet, how to be that coach?

Part of what makes a great coach is being real about one’s own abilities.  There are lessons to be learned on all sides. “I admit that I’m still a student of the game,” says Kevin Duncan, a basketball trainer and coach at Kingdom Sports Center in Franklin. A coach and trainer for over 20 years, Kevin found inspiration in his childhood mentors from the Hamilton Boys & Girls Club, where he played as a kid and took on leadership roles as a young adult. “I learned a lot and had great mentors there, it really sparked my interest in coaching,” he says, adding that he is always learning something new from his kids and parents, which inspires him.

A second piece of the puzzle to making a great coach is strong communication. For Duncan, that includes communication between parents and their children, and respecting their kids’ thoughts and wishes – whether that’s to play more, or even take a break. “For me as a trainer, I learned to understand and speak to parents that this is about the child’s journey,” he says. “Parents are along for the ride.”

Occasionally, a coach finds himself in the role by accident. Bryan Rogers has been coaching his daughter Jordan since she was in the fourth grade, but it started off as just helping her at home. “I would spend time working individually with her at home on the fundamentals,” he says, adding that eventually his daughter’s coach asked him to start helping with practices because his daughter showed such signs of improvement. He has found success with continuing to focus on development over winning. “Winning is fun, yes, and all coaches want to win, but it is not the most important thing,” he says. “I try to focus on development; teaching the game, and preparing them for higher levels of play.” He adds that the best coaches demonstrate sportsmanship, teamwork, a positive attitude, respect for players, referees and parents, good communication, and “Patience, lots of patience.”

You’re already driving kids to and from practice, packing bags, and maybe even planning out-of-town trips for your star athletes. But if you want more, there is certainly more to be had. Whether you want to take on the role of an assistant coach or help with things like keeping track of equipment or snacks, there are plenty of opportunities to jump in, with some surprising benefits for you.

Seven-year-old Roman has wrestled, played basketball and baseball, and is starting his third year of football. Mom Lori Smith says, “My husband and I feel it’s important to be active in our son’s sports. We are both board members on the peewee football program … We feel it’s important not only to help Roman succeed, but to be active in the community and get to know Roman’s friends and their parents. Already we have gained wonderful friendships.”

And yes, nearly everyone has at least heard a horror story of a parent who tried to lead from the sidelines. The good news is that those stories don’t reflect the majority of parents, although there are a couple things to keep in mind as your level of activity increases.

“Parents sometimes try to get too involved,” says Rogers. “They want to tell you how to coach and how to run the team based on what they see from the bleachers. They don’t understand that they are usually only watching their own kid. Where I spend time on the sidelines watching everybody on the floor, making changes based on what I see, and trying to make split second decisions on what I think may work.” And while a coach’s decisions may not always be correct, they are made in the best interests of the entire team.

Duncan reminds parents that it’s about the kids. “Sports have changed so much,” he says. “They’re so much more organized, kids can play year-round … be watchful of whose ambitions you’re developing and the pressure you apply. Know that just because you can play the game doesn’t mean you can break it down and deliver it to a kid.” He also suggests parents ask their kids what they think about having Mom or Dad coach the team. “Ask your child what they think about you coaching — and respect their answer!” After all, time on the court with a team might be the one thing that your child wants to have all to himself, without his parents butting in. And ultimately, Duncan advises parents to make sure to stay focused on their kids’ development as an athlete, but also as a growing person. It will help everyone keep his head in the game.