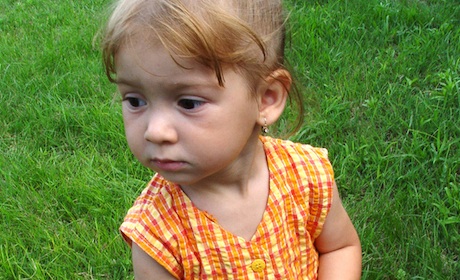 Oh, the tug-of-war that kids and clothes can bring! Yes, freedom of expression starts early, so perhaps you can learn to manage it. Find out how other parents do it.

Listen in on any conversation between a group of moms, and chances are good the topic of clothing will come up sooner or later. Whether the children are age 2 or 12, their choice of dress often sends parents into fits of frustration while part of the style dilemma stems from current trends and what is available in stores, the bigger question is how to teach children basic fundamentals of style and function. By the time they start kindergarten, most children have the ability to learn how to match colors and patterns and to understand basic weather conditions such as hot, cold and wet.

Russie Carter, who runs a children’s consignment sales, says she started teaching her children how to make clothing choices by limiting what she put in their drawers. “I put away out-of-season items so it wouldn’t be a temptation to wear tank tops in the middle of winter,” Carter says.

“When they were in kindergarten I let them choose anything that was clean in their drawers. As they got older, I selected clothes that were acceptable to me and then took them shopping to let them choose. I helped them pair up different outfits and then let them make their daily choices. I kept their dressier clothes – for church or special occasions – in the closet and that was off-limits for play and school,” she explains.

Elizabeth Stone, a mother of two elementary school boys uses a slightly different tactic. “Over the years I’ve learned that my boys only want to wear T-shirts and they don’t much care what kind of pants. When I put away their clean clothes I put a shirt, pants, socks and underwear together and then all they have to do is pull out the clothing package of their choice,” she says. “It’s also a great way to save time in the morning.”

Start With the Basics

Most early elementary children will wear whatever is comfortable to them. This is a good time to start explaining what matches, what doesn’t and what is appropriate for what occasion.

“I started teaching my kids what worked together by taking them shopping with me for those little matched HealthTex and OshKosh sets,” says Sammie Lea, who is now doing the same thing with her four grandchildren. “Usually there are two or three tops and bottoms that go together, so I’d pull all those off the rack and let the kids choose which top they wanted to go with which bottom,” says Lea. “Any choice would work, so I didn’t have to worry about it and they learned about matching colors and patterns in the process,” she adds.

Most child development experts agree that clothing battles can be avoided by giving children this age some freedom of choice, but not so many that they are overwhelmed. A good rule of thumb is to help them pick out two outfits for the next day before they go to bed, and then let them choose which one they want to wear. At this time parents can explain what the weather will be like and why either of these two choices would be appropriate.

These are, for the most part, teachable years. It’s the best time to say things like, “Yes, that is a blue shirt and those are blue pants, but the two shades of blue just don’t match. See how much better the pants look with this blue and white shirt?” Or, equally important, “It’s supposed to be rainy tomorrow. If you wear your new white tennis shoes, they might get all muddy when you go outside.”

Then there is the principle of natural and logical consequences. After once wrestling her 5-year-old son to the floor to get his winter coat on, Jean Johnson of Franklin decided that the best way to learn was to get cold. Ditto for wearing his favorite sneakers in the creek. “I told him that if they were wet, he couldn’t wear them to school the next day,” Jean recalls. “They were going on a field trip, and he was heartbroken. After that, he’s started thinking more carefully about his choices.”

Starting at about age 8, children – especially girls – start having very definite opinions about their clothes. “I won’t buy anything my daughter doesn’t pick out,” says Tess Greene. “I used to shop mostly consignment sales, but now I don’t dare buy anything I can’t return. Even if it’s something that worked last year, or even last week, it might be all wrong now. The most frustrating part is that she can’t even tell me why!”

At this point, it’s wise to pick your battles, according to Lorie Browning, a mother of two girls, ages 7 and almost 9. “They’re definitely influenced by popular culture,” she says, “so I try to find some part that’s acceptable to our value system. I’m OK with bell bottoms, but say ‘no’ to bare tummies; or, they can wear spaghetti straps if they put a T-shirt on underneath.

“On the other hand, if they’re just going to be at home, it doesn’t matter much what they wear,” Lorie says. “That’s when I don’t even try to fight it.”

For the most part, boys this age are much easier to deal with than girls when it comes to clothing, according to Lea. “Sometimes you get a clothes horse, a boy who is very fashion-conscious, but mostly the problem comes from getting them to wear something clean every day. It can be tough to get these boys to wear a button-up shirt and dress pants, too,” she chuckles, “but just give them a few years.

“In my opinion, just put plenty of comfy jeans and t-shirts in their drawer and let them have at it. Then you have some leverage if you need them to dress up a bit.”

“At 9, girls begin to push away from their mothers and attach to their peers,” says Jan Faull, a child development specialist and author of Unplugging Power Struggles (Parenting Press). “Superficial conformity in the form of clothes is just one way she does this, and it’s developmentally appropriate.”

Faull says that “when it comes to your daughter’s clothing, think of yourself not as her mom but as her fashion consultant.” To do this, she advises taking your daughter shopping and letting her try on several items. Give her feedback, but let her be in control. “Tell her what you like and don’t like, but allow her the freedom to choose her wardrobe” (within your own personal budget restraints).

The main point to remember, Faull says, is not to let clothes dominate the mother-daughter relationship. “At this age, she needs your help in making judgments not only about clothes, but also about friends, school life and social situations,” she writes. “But you’ll have to come in the back door and use your influence subtly. Barging in the front door with harsh controls, advice and criticism will harm your relationship and set up a battle of wills that could continue for years,” she writes.
And with adolescence just around the corner, there will be enough battles without engaging in a clothing war now.

Nancy Brown is a freelance writer. She has a son and a daughter.