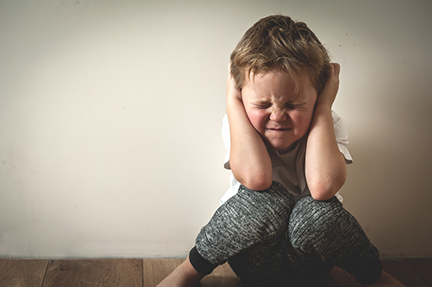 Disciplining your child in front of others is hard, to say the least. So, when your little one shows his true colors in the middle of a crowd, be prepared!

Yes, it’s a nightmare when your child starts acting up in the middle of the grocery store, but the fact is all kids have tantrums at some point! There’s nothing worse than a toddler tantrum: Your sweet child is screaming. Perfect strangers have their eyes on you. Your face gets so red hot that you’re sure you might be on fire. You want to run away, abandon your loving parental duties – but no!

You must take charge and handle the moment gracefully … but how? Should you bolt from wherever you are and head home? Should you – gasp! – spank your child in public? When your child’s first public display of overt disobedience occurs, be ready. You can’t avoid it, so prepare for the moment when your little darling turns into a little demon.

In fact, when Douglas’ son was 2, he pulled the plug on an entire cash register system while they were shopping at a local store. “He was magnetically drawn to plugs and outlets,” says Douglas.

“This is natural behavior for toddlers,” says Robert Billingham, an associate professor of human development and family studies. “Everything is so new, exciting, interesting and stimulating. They’re simply responding in a curious sort of way,” he adds.

An ounce of prevention

The best way to handle bad behavior, of course, is to avoid it. “Prevention is always the best strategy with toddlers,” says Douglas. This may seem impossible when parenting a toddler, but with a few tricks up your sleeve, you may be able to head it off at least some of the time.

One of the best ways to prevent bad behavior is to pay attention to your little one. Before you head to the supermarket, consider a few things: Is your toddler hungry or tired? Is he having a bad day? Is he feeling sick? It’s probably best to delay your trip if the answer to any of these questions is yes. Otherwise, you’re just setting yourself up for trouble. If your toddler seems to be up for an outing, there are several strategies that may help to keep misbehavior at bay.

First, before you arrive, tell your tot exactly what you expect of him and the consequences if those expectations are not met. Billingham suggests establishing a single cue that lets your tot know that you’re reaching your limit. That could be your tone of voice, a gesture, clapping your hands or a certain word. It should be “a very clear signal to the child that very specifically says the behavior has to stop now,” he says.

Another strategy is to keep your toddler entertained. Make a game out of grocery shopping, such as asking him to find an item with a certain picture on it. Douglas also suggests bringing along a “trick bag” with hand puppets and other toys that you can pull out at a moment’s notice.

To reward or not to reward

Another tried-and-true strategy is to reward good behavior, but many parents feel like that’s bribery. Some experts, however, believe there is no harm in a little reward as long as you don’t overdo it.

Billingham feels that rewarding children is a great strategy because it teaches cause and effect. Douglas agrees. “We get rewards in adult life for good behavior,” she points out.

You may think that rewards can get a bit expensive, but they don’t have to. Barbara Polland, a professor of child and adolescent development and author of No Directions on the Package: Questions and Answers for Parents With Children From Birth to Age 12 (Celestial Arts; $12.95), suggests buying a bag of cheap party favors and then wrapping them individually in tissue paper. When you’re on your way out, tell your child that if he behaves, he’ll get to open his gift, but be sure never to give the reward if he misbehaves.

Other inexpensive rewards can be activities that your child enjoys, such as a trip to the park or playing a favorite game.

“Correcting children’s misbehavior in public is difficult. Others are viewing your child’s misbehavior and your
response to it. Your worthiness as a parent is under public scrutiny.â€

If you’ve pulled out everything in your arsenal to no avail and your little one is still headed into a full-blown tantrum, stay calm! “If you get riled up, he’ll get riled up,” says Douglas.

The best solution for handling a tantrum is to pick up your child and take him out of the situation. “My choice is to remove the child from everyone and talk privately about what’s happening,” says Polland. She suggests taking your child some place safe and letting him thrash it out.

For example, you might put him in his car seat, and shut the door staying on the other side, calmly. She suggests telling the child to knock on the window when he’s done. According to Polland, children know they’re more likely to get what they want because you don’t want to be embarrassed.

One Christmas, Billingham’s son threw an all-out tantrum at a crowded store. Instead of getting upset, Billingham ignored him. When his son took a break, he began applauding him and told him he needed to kick the left leg harder to keep up with the right. “If you don’t get embarrassed by the child’s behavior, it loses all of its power,” he says. His son ended up giggling, and they left the store.

How do you deal with strangers interfering when your child is acting up? “At some level, parents have to be aware that concern by others might in fact be an issue,” says Billingham. He suggests smiling at people and making a joke about the behavior by making comments like, “Only another 15 years to go!â€

And keep in mind what matters most: your relationship with your child. “How the other people view you is much less important than how you interact with your child,” says Polland.

“Most of us at some point in life have been either the toddler or the frustrated mom,” says Douglas. “We just have to hope that we don’t end up turning into the annoyed little old lady down the road, forgetting just how challenging it can be to be that mother.â€

So for now, if you’re stuck in the role of frustrated parent, hang in there. With a little planning and a few deep breaths, both you and your child may come out of the situation a little wiser.

Lyn Mettler is a freelance writer and mother of one.