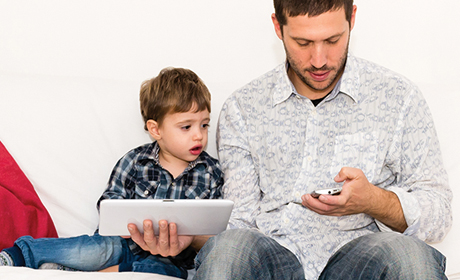 The effects of distraction in the workplace have been widely recorded. A 2007 study conducted by Microsoft Research found that participants spent, on average, nearly 10 minutes switching tasks caused by alerts such as e-mail or instant messages, and spent, on average, another 10 to 15 minutes before returning to the disrupted task. The study also found that people were likely to visit other applications while they were already distracted.

If distraction does this to our work productivity, what does it do to our parenting?

The main concerns of the 2007 study were e-mail and instant messaging in the workplace. But now, we carry these traditional workplace distractions and more right in our pockets. Sandra Bond Chapman, Ph.D., founder and chief director of the Center for Brain Health at the University of Texas, reported to Forbes that multi-taskers who are constantly connected to e-mail, text and social media apps, seek the immediate satisfaction of beeps, dings and buzzes. Responding to the device actually creates an addicting release of dopamine in the brain.

Catherine Steiner-Adair, Ed.D., clinical psychologist, consultant and co-author of The Big Disconnect: Protecting Childhood and Family Relationships in the Digital Age (Harper Paperbacks, 2014), says we develop a psychological dependency on our phones, “like a little blankie.” We experience separation anxiety and lose the ability to self regulate our usage. If you experience phantom rings — the sensation that your phone has vibrated or pinged when it really hasn’t — or if you take your phone with you to the bathroom, you may be experiencing a psychological dependency on your phone.

What Happens at Home

Young children seek meaningful interaction with their parents and instead are left feeling left out, like they’re boring, uninteresting and less important than whatever is on their parent’s device. This is where a parent-child disconnect shows up. While kids are trying to navigate a tech-heavy outside world, Steiner-Adair says, at home, you become that anchor for your child to learn deep, active listening.

Picture the family room of your home. Your young child sits on the floor playing Legos or coloring. You sit nearby with your laptop open. Are you really there? Pediatrician Jane Scott, M.D., wrote for the Washington Post, “Parents today are probably the most informed and involved generation in history. And, yet, in the company of their children, they often act as though they’d rather be someplace else.”

Scott says she sees evidence every day of how inattention affects kids. It presents as temper tantrums and separation anxiety. She says, “Yes, all of this is normal attention-getting behavior, but it often is preventable.”

Steiner-Adair says children’s emotions towards their parent’s devices (Smartphones, iPads, laptops, etc.) are similar to what one would see in sibling rivalry. The child feels the need to compete with the phone. In fact, children consistently use the same adjectives when describing to Steiner-Adair how they feel about their parent’s interaction with their electronic devices. Sad. Mad. Frustrated. Lonely.

“Wait a minute,” you might protest. “How is this any different than when TV came on the scene? Or radio?” Yes, if we reach back far enough we’ll see parents who shooed their children away for the company of a good book or gossiping neighbor. But the difference is this: our phones are constant. Steiner-Adair points out that at the ping of a notification we “turn our backs on our conversations.” It’s akin to giving attention to the baby sibling tugging on mommy’s shirt when the other one is trying to show her the champion worm he just dug up.

When your child bounds into the room and you’re deep into responding to an e-mail or text, take a second to breathe and remind yourself that you love this person. It sounds silly, but it will help your tone. Steiner-Adair says that when we are texting we are in a psychological task-mastering mode. When we’re interrupted in that mode we can sound harsh or curt and most often feel annoyed. Be conscious of this and take the opportunity to soften your response. Say something like, “Just a minute sweetie, I need to respond to this,” is much better received than a curt, “Hold on! I’m just checking on something!”

“Just checking” is the dreaded phrase, she adds. “Just checking,” means you’ve “checked out,” and by saying, “just” you justify it. But what you’ve really done is made a choice. You chose to interact with the phone instead of your child. You made your child wait — and made him feel less important — while you interacted with someone who’s not even in the room.

Picture a professional mom and dad watching a little league game. Their child plays center field. The child makes the game-winning catch, looks up to his parents in the stands, and instead of seeing proud smiles the child sees two people staring at their phones. “We’ve lost the boundaries between work and home,” says Steiner-Adair. One child who actually faces this predicament said to Steiner-Adair, “I wish my dad wouldn’t go to the games.”

That’s not the feeling a parent wants to prompt when they’re trying to be supportive.

In your mind, you may think you’re effectively multitasking. You tell the boss, “My daughter has a softball game I’d like to go to, but if you need me you can get me via text.”

Why do we expect teens not to text and drive, but then fudge it when it comes to us? It’s illegal to text and drive! You justify that you’re an adult with many years of driving under your belt. You’re an expert driver. Or you think, this is important. It’s work. I’m just checking — see?

The kids get into the car and tell you how dangerous it is. They tell you what they’ve learned at school about texting and driving. Then many times you offer up a justification or just don’t listen, getting annoyed and shushing them.

Steiner-Adair points out that you should encourage your children to stand up to risky behavior — and that they should stand up to your’s. But if your child gets a negative reaction when pointing out your risky phone use, how do you expect him to handle it when he’s at a party and his friends are engaging in risky behaviors? When the kid is right, the kid is right. Put your phone away.

Businesses focus a lot on time management — you can, too. It may sound simple, but it’s not always easy. Turn the notifications off on your phone. Get rid of the “ping” that makes you anxious and eager to “just check.” You control when you engage. Don’t let the phone control you.

Self regulate. If it’s too easy to reach for a phone in your pocket and get distracted, put it someplace else. Yes, playing Candy Land can be the most boring game in the world when you’ve played it 18 million times, but it’s important to your child and he’s laying the groundwork for social skills, math and creative play. Give him a chance to do that and have your undivided attention.

Steiner-Adair has a tip sheet of eight things you can do each day to strengthen your family connections. One is to wake up 30 minutes before your child in the morning. Use that extra time to check e-mails and see what you missed on social media and then put your phone away. This will leave you free to engage with your child while he gets ready for his day. He needs you and needs to know you’re responsive and reliable. Other tips of Steiner-Adair (all of them can be found at catherinesteineradair.com) include: