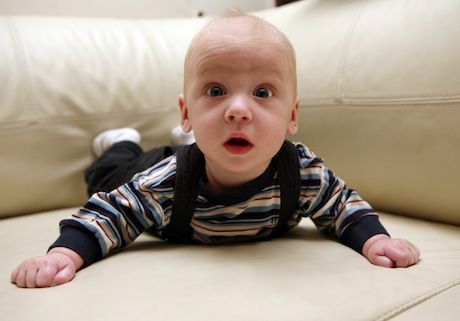 The first time it happens, you don’t expect it. Your baby looks at you, sticks out her tongue and makes a gentle razzing sound. It’s almost impossible not to smile and make a raspberry back at her. Just try. What starts as a fun and silly game between parent and baby actually sets the foundation for language, social skills and fine motor skills such as eating and drinking from a cup. So pucker up those lips and help your baby begin to experience a whole new world.

Raspberries: More Than Just a Fruit, They’re a Workout

Most babies start blowing raspberries and bubbles between 5 – 6 months of age. After a few tries, they usually catch on quickly, particularly if you encourage them.  And you should blow back; besides being darling, those raspberries teach a variety of important skills.

“Razzies really teach babies how to regulate their voice, how to turn it on and off, change the volume and the pitch. It shows them how to navigate the diaphragm, mouth, lips and tongue,” explains Tara Kehoe, a speech and language pathologist at Easter Seals.

All that noise gives the jaw a great workout by exercising the muscles needed to move lips independently of the jaw and tongue. That’s a crucial skill for when they start using a spoon and eating chunkier foods.

Have Fun with this Stage

What parents notice most about the raspberry stage is that it’s just plain fun.  Babies laugh and giggle in response to their parents lip blowing and then they do it back. It’s the early foundation for the back and forth rhythm of a conversation.

Frequently, this is when older siblings begin to realize that the baby is capable of interaction. “My 4-year-old daughter, Lilliana, loves to make noises with her 9-month-old baby brother, Seth. The interaction they have is awesome and I am sure it will also lead to a stronger sister-brother bond,” says Kiera Ashford, a local mom and mother of two. “I love to sit back and watch them ‘talk’ to each other.”

Blowing raspberries is almost nature’s way of ensuring that you join in. “As soon as Seth began to make his first noises, we would all join in on his little conversation,” says Ashford. “It is a great way for Baby to learn how to communicate with the people around him as well as for older siblings to learn how to have fun and interact with him.”

Once they’ve mastered the raspberries, be ready for language to start developing. Babies begin to learn that when they make a sound someone may respond. The parent also usually responds by getting physically closer to the child and may smile at the child during this interaction. The parent may also laugh and be animated, which may encourage the child to produce more “raspberries.”  Eventually, the children may begin to produce different sounds, some of which may be early speech sounds.

Courtney Romano, mother of a 7-month-old, states, “I think blowing the bubbles has taught her how to use her mouth and enhance her language skills. Right after blowing bubbles she started using different sounds like her Gs and Bs in her baby talk.”

Early speech usually entails repeated constants and vowels with no discernable meaning. Much to the delight of mom and dad, the “m,” “d,” and “a” sounds are frequently the earliest. Hence “mama” and “dada” are often two of the earliest words. That soon develops into long strings of words such as “bababababa” and then eventually combined consonants for nonsense words such as “takomamano.”  They frequently combine gesture with the sound so you might get “ah” with the arms raised for “up.”

Babies may begin to make razzies as early as 3 or 4 months, but more typically by 5 or 6 months. If your baby isn’t producing these kinds of sounds by 7 months of age, it is suggested that you contact your pediatrician. Some babies may skip the raspberry stage, but they should make some type of sound that plays with their lips and their mouth. If not, it could be an indication of delayed speech development or a hearing issue.

Otherwise, enjoy those raspberries and bubbles. Play other cause and effect games with your baby and get her to communicate back to you. It’s an amazing and wonderful time of life, enjoy every sweet smile, laugh and crazy noise your baby throws your way!

Laura Amann is a freelance writer.