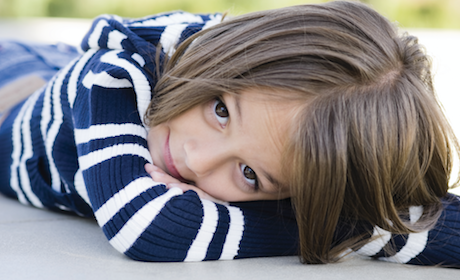 Jeannie* was 4 years old when her mom noticed a dark patch developing between her legs. “What did you sit in?” She asked during her bath routine thinking it must be dirt or something from playing in the yard. “Nothing, that’s my fur,” Jeannie replied. What followed after was a series of doctor appointments to assess Jeannie’s early onset puberty.

We hear parents reference their child’s development in terms of being early or late “bloomers,” but what and when is normal for puberty? What is out of bounds?

“Signs of pubertal development before the age of 8 in a girl and 9 in a boy represent precocious puberty or early onset puberty,” says Catherine Gordon, M.D., M.Sc., director of the Division of Adolescent and Transition Medicine at Cincinnati Children’s Hospital Medical Center. She’s dual trained in pediatric endocrinology and adolescent medicine, and has a special interest in pubertal disorders. No signs by age 13 in a girl and 14 years in a boy is considered late.

Eight and 9 years old sounds so young. That’s third grade. Often the hallmark event in a young girl’s life is when she starts her period. Doctors ask for the date at appointments so it’s ingrained in girls as the start of something. However, the start of menses is not when puberty begins, it is instead part of a larger process. Boys’ pubertal stages are much more subtle with no real hallmark event.

“There are actually two physiological processes involved in puberty,” explains Gordon. Depending on which process is being triggered early determines how your child’s doctor will respond.

One process is known as thelarche, which in girls represents breast development and in boys causes the enlargement of testes and penis. A separate process driven by the adrenal glands is called adrenarche and prompts the development of pubic hair and body odor and eventually hair under the arms. “There are some children who are perfectly healthy but at age 4 or 5, their adrenals wake up early,” says Gordon. They don’t otherwise go through the rest of puberty early, however. They may just be hairier than their peers. This is the most common type of early onset puberty.

This was Jeannie’s experience. Her doctor ordered blood work and took X-rays of her hands to check on her growth plates. Gordon says, “The only time we worry about early puberty in this case is if the adrenals are making such a high level of those adrenal hormones that it advances the bone age.” Advancing the bone age is what causes the growth plates to zipper up prematurely, making it so the bones don’t have the opportunity to fully grow and resulting in short stature.

“If the bone age is normal we generally reassure families. If we see an advanced bone age, we do much more of a hormonal workup and worry about an adrenal lesion or condition that may be leading to production of excessive hormones,” says Gordon.

“The interesting thing about precocious puberty is that we are often not sure why it starts early,” says Gordon.

Precocious puberty is more common in girls than boys and often there’s not a clear trigger. Gordon says, “Rarely, it points to a central nervous system abnormality or a brain tumor, so we will order an MRI to rule it out but in many cases we don’t identify a cause.” African American and Latino children are also more likely to start puberty earlier than Caucasian or Asian children and this is not considered physiologically abnormal. Gordon says when assessing a patient she takes into account not only ethnicity but also family history. Boys tend to mirror their dad’s puberty and girls tend to mirror their mother’s.

Estrogen is also stored in fat. Therefore, Gordon says, “If the child’s bone age is normal and the child falls within an ethnic-racial group that is known to have an earlier onset of puberty and the child is perhaps overweight, I’m going to monitor things closely to make sure [puberty] doesn’t progress too quickly.” However, if the child is below the age range that is considered normal and appears to be in full early precocious puberty — intervention is recommended.

We often hear rumors that soy, or added hormones in our food are causing children to start puberty early. Gordon says it’s an area of research but there are no strong data at this point. “Certain substances in the environment may have an ‘estrogenic effect’ on the body,” explains Gordon. “Though they’re not estrogen they’re similar in biochemical structure and can stimulate estrogen receptors to cause a little girl to start her puberty much earlier than she should.”

Gordon also says researchers are looking into lavender because it may also have some estrogenic qualities. She says, “There is some question as to whether parents should not use lavender oils or lotions on their children, but the data are not compelling either way.” Little boys can also develop breast buds.

“Some data suggests that an early onset of puberty may be associated with a higher risk of breast cancer as well as depression,” says Gordon. Early puberty may cause short stature when the bone age advances prematurely triggering the growth plates to fuse. She cautions that it can be difficult for “early bloomers” who aren’t ready for puberty yet from a psychosocial standpoint. Some children are embarrassed and it can affect their self-esteem in a negative way. Gordon says, “Their system turning on too early is a setup for both depression and anxiety and for bullying in some cases.”

HOW PARENTS CAN HELP

Puberty is a confusing time no matter what age. However, when a child begins puberty on the young side they’re more child-like and have less understanding of what’s happening. Helen Duncan-Gavin, LCSW, Mental Health Therapist at Mebs and Associates LLC, says that the “trauma isn’t necessarily the puberty itself but the fact that they’re not prepared.”

Tara Wittrock, Ph.D., director of Special Student Populations for Bellevue School District agrees. Curriculum for basic sex education doesn’t start until fifth grade when kids are 10 and 11 years old — and remember, age 8 is still within the normal range for a girl to begin puberty. Wittrock says there’s a wide range in knowledge base among children in that first health class. “Some kids are hearing clinical terms for their anatomy for the first time while for others, the class is a review.”

It depends on their home and cultural situations. Parents can request their child be removed from the class during this education to participate in a different activity if they’re uncomfortable with the curriculum. “And some parents do,” says Wittrock. This does the child a disservice.

Not knowing or understanding what’s happening is where the emotional distress and anxiety is rooted. Ethan* remembers being worried the first time he ejaculated. It scared him. Up until that point he had only ever seen urine. He thought something was wrong with him. His dad hadn’t talked to him about puberty and they had not talked about it in school yet either. He looked it up in the family encyclopedia to make sure he was OK, too scared to talk to someone about what had happened. Ethan says he was relieved when he read that “was actually supposed to happen.”

It can be confusing and embarrassing for a young boy to experience random erections if no one has ever talked to him about his physical development. Teaching body function is what the aim of fifth grade health curriculum is, says Wittrock. She stresses that boys and girls are split into different classes at this age because it’s embarrassing for them to talk about it together.

When things do happen unexpectedly at school, Wittrock says it has been her experience that elementary teachers do a good job at explaining things compassionately in frank and clear terminology the child can understand. It helps normalize the situation so they can cope and find comfort. Even if you feel your children are too young to hear or grasp the sexual functionality of their bodies, it’s important for them to understand how their bodies grow and change.

*Names have been changed.