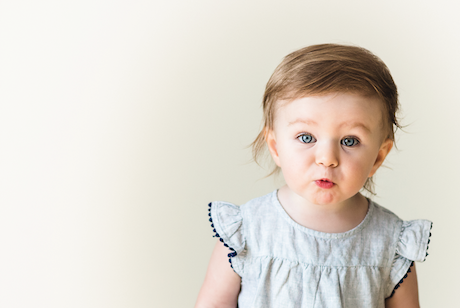 Whether it’s “dotdog” when they mean “hotdog” or “yeyyow” when they mean “yellow,” every parent remembers when their toddlers first started talking and which words they mispronounced. Some words are so adorably appropriate they get adopted as part of the family’s vocabulary. Gina Heeg’s daughter Kate called Bandaids, “bangdangs” and it stuck. “We still use it,” she says. But when does cute become a concern for long-term language issues?

Language development starts long before a baby says her first word. Candace Ganz, Ed.D., CCC/SLP is the Director of the Division of Speech Language Pathology at Cincinnati Children’s Hospital Medical Center (CCHMC). She says, “In a typically developing child there are things we look at in addition to sounds and cooing and babbling.” They look to see if a baby is smiling, and looking at his caregiver. Does she seem like she’s watching your mouth and listening to what you’re saying? Does she light up when she hears a familiar voice? They look at gestures being made. Ganz says, “Those are communication even if the words aren’t there. Those are building blocks that will lead to language later.” Typically we see these building blocks emerge during social interaction and play; we don’t think of them as being foundation skills for speech and language. But Ganz says, “they are critical early pieces.”

When first words do emerge, babies will have different preferences when making sounds. And even though Mom and Dad are eager to hear their baby say “mama” and “dada,” Ganz says, “babies will generically say ‘mama’ or ‘dada’ before they actually pin it on Mom or Dad.”

Once we get beyond first words the fun begins with toddlers putting words and phrases together and communicating more verbally with their caregivers. They will get things adorably wrong. Brian Fisher, MS, CCC-SLP, and Speech-Language Pathologist at CCHMC says that Rs and Ls are common trouble spots; these sounds are more difficult so children master them a little later.

Fisher says, “At 2 and 3 this is not a big concern for us, but it is a common concern for families.” Ganz points out, “Sounds aren’t developed overnight — it can take six or seven years.” Mastering a sound depends on the context and the placement in a word or sentence. A child may say, “yes” clearly but as mom Dorothy Rosby remembers, her son would say, “I love Lou” instead of “I love you.”

Ganz says it takes a while with lots of mistakes to master the different sounds and placements. While a child is learning, Ganz and Fisher both say it is more important how much we understand what she is saying. Ganz says at age 2 you should be able to understand about half and by age 3 that should increase to 75 – 80 percent of what she says. “There are still lots of mistakes,” stresses Ganz, “but they can get their point across. When a 3-year-old says ‘Wook at the wabbit,’ understanding her is more important than whether the R and L are correct.” Ganz says to listen for more than whether the sound is spoken correctly. For example, even if the consonant at the beginning of the word is wrong, is there a consonant being articulated at all? Ganz also reassures that it’s not uncommon to see a 5-year-old who still makes some mistakes.

When you can’t understand a child, Fisher says, “Take the pressure off and encourage her to try once more.” You can also give her the option to gesture or point so that her message is understood.

Ganz is the mother of three boys and she says though there are individual variances, if you look at normative data, girls tend to have larger vocabularies earlier. Girls also tend to be referred less often than boys for speech and language issues. However, Ganz is quick to stress that the outcome down the road does not tend to be significantly different. She explains, “A 2-year-old girl may have more words than a boy but they both still have a lot of words. A toddler girl’s speech may be a little clearer, but once she enters school, those differences tend to be minimized.”

“There’s a difference between what we call normal non fluency and stuttering and it is associated more with stage-of-language than age,” says Ganz. Normal non fluency can happen anywhere from ages 2 to 7. According to the Stuttering Foundation (stutteringhelp.org), “Approximately 5 percent of all children go through a period of stuttering that lasts six months or more.” Most recover by late childhood, but The Stuttering Foundation reports that about 1 percent experience long term challenges.

When early language disorders don’t get treated it’s sometimes hard to know who will struggle later. Everyone knows a 2-year-old who didn’t have any words and grew up just fine. Ganz says, “We can’t always predict which 2-year-olds who aren’t talking are going to have later language issues or possibly learning disabilities.” Therefore, she stresses, “If there is a problem early on it’s most prudent to treat it.” If left untreated, Fisher says, “It’s definitely harder to fix errors once a habit is formed.” Lettersound recognition is an important part of literacy and when kids start to read and sound out words to spell, their speech errors may work against them.

Kids with speech issues may experience psychosocial issues if teased by their peers or if unable to get their point across. “Nobody wants to repeat themselves three times,” says Fisher. A child may deal with high levels of frustration and decide it’s not worth it. Looking further into the future, uncorrected speech issues can make employment difficult if a person is not easily understood.

“The biggest thing to remember,” says Fisher, “is you’re the expert on your child.” He stresses, “If you’re concerned, get a referral and talk to someone.” It doesn’t hurt to call and ask.

Use Child Directed Talk. Sometimes called “Motherese,” this melodic, simplified language is something you can do when you talk to Baby. Ganz says the key is to keep her engaged when you’re talking. When you speak to her, simplify your language, slow down, change the inflection of your voice, but don’t change the articulation of the words being spoken. Speak your words correctly. Use correct grammar. When she says something incorrectly, let her hear you say it naturally and correctly. You can still have your nicknames for things based on his adorable errors, but also teach her the real words.

Experience screen time together. Yes, screen time should be limited. When a young child does have screen time it should be to watch quality programming with an adult. Treat screen time like you treat a book. Instead of static entertainment, it should be dynamic and prompt conversation. Point to things and ask questions; let her tell you what she likes about what she’s watching.

Read to your baby. There’s so much more you can do with a book than read the words to get through a story. Let her skip pages and talk about the illustrations. Point, giggle, gesture and share in the experience of observation in the illustrations along with the stories and rhymes. Board books with few or no words remove the distraction of the words and let you talk about the story unfolding in pictures.

Learn a second language together. If English is not your best language, you may not be teaching your child proper articulation or grammar. Communicate in your stronger language, and learn the second language together. “Typically, kids do remarkably well learning multiple languages at the same time, says Ganz. ”They do develop language differently so their trajectory will be different.” Learning multiple languages while young is a benefit to her development.