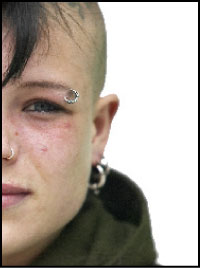 My son recently turned 13, and the last traces of that sweet little boy who thought I hung the moon seem to have vanished. In his place is a strange, slouching creature with adolescent angst oozing from every pore. This extraterrestrial I once called flesh and blood, whose mood swings dwarf the Grand Canyon, seems intent on bungee jumping from that rickety bridge connecting a child with adulthood. And I think he plans on dragging his rapidly aging mother along for the ride.

A drastic language change was the first indication of alien infestation in my once cherished offspring. The rosy-cheeked cherub who used to run to me, eyes shining with adoration and shouting “Mommy!” began to address me (and everyone else) as “Dude.” At 13 months, he was a sponge, joyfully soaking up new words, becoming more communicative every day. At 13 years, the hormones surging through his body have cut a swath through the speech center in his brain; his mouth, when it speaks at all, produces mere shrunken shreds of complete sentences apparently understood only by other members of his species.

“‘Sup’ is a perfectly acceptable, all-purpose phrase in an adolescent’s world. “Mom, I love you,” on the other hand, would burn his monosyllabic lips like acid and permanently corrupt his coolness. Communication with this high-tech yet illiterate generation is fraught with frustration. My son, who can’t seem to utter two intelligible sentences to me, airs his gripes through text messaging. Just the other day, a message flashed on my cell phone in fractured syntax designed to torture my English major soul.

Then there’s the alteration in appearance. While I’m desperately trying to avoid bags and sags, this long-haired Neanderthal living in my house embraces them as fashion. Wearing gravity-defying pants slung low across his scrawny backside, he looks just like a baby with an overly full diaper. When I helpfully point this out, I get another overwrought, electronic missive that ends with several lines of the text message equivalent of a scream. This modern means of communication does keep the house quiet.

Adolescent males seem to lose all capacity for living like civilized human beings. This means that my boy constantly raids the refrigerator but can’t manage to close a door, that he can take 30-minute showers but never hang up a wet towel, that he stuffs freshly laundered clothes back into his hamper rather than putting them away. I find sticky cereal bowls in his closet because he’s too lazy to return them to the kitchen, and the lunchbox he claimed he lost is growing whole colonies of bacteria under his bed. I now understand why some animals eat their young.

The child who begged me to read to him daily now rolls his eyes in disgust when I suggest we turn off the video games and pick up a book. The angel who proudly showed me off to his kindergarten classmates now pretends not to know the deranged woman waving to him in the middle school hallway. My fall from grace, seemingly overnight, has left me depressed, bewildered and prone to emotional excess.

“You could cut the apron strings without slicing through my heart, you know,” I whimper in one of my calmer moments.

“Mom,” he mumbles in that teenage tone of voice, “why can’t you just act normal?”

Normal is, of course, a relative term. In about 10 years, I will magically return to normalcy as my pubescent boy turns into an adult. At least I hope I do. In the meantime, I’m going to hang on to those severed apron strings. I may need them to strangle him.

Jackie Papandrew is a freelance writer.