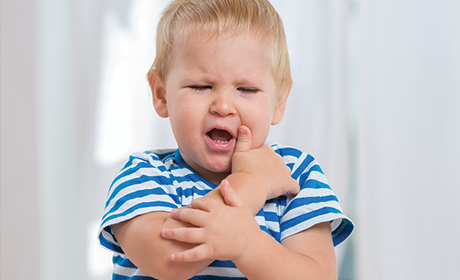 Although it’s been 15 years, I remember it like it was yesterday. My 2-and-a-half-year-old daughter Andi kept coming home from the babysitter’s with bite marks and bruises on her. The sitter told me her own 2-and-a-half-year-old daughter was the culprit. She encouraged Andi to bite her daughter back saying that’s the only way it was going to stop. Since the sitter was an experienced mother and previous daycare worker and Andi was my first, I thought this was the best solution. The next day when I arrived to pick Andi up, the sitter’s daughter had a black eye. I immediately asked what happened. “Well, Andi didn’t bite her back … she punched her,” the sitter said.

I couldn’t believe it. My 2-and-a-half-year-old blacked another kid’s eye! But, the little girl never bit Andi again. I’m not saying that was the right answer, it’s just what happened.

Some children make a habit of biting, which can be very frustrating for the victim and the parents of both children.

I think the babysitter’s daughter bit Andi because she didn’t like her mom giving Andi attention.

Jill Griffin, nurse manager at Pediatric Associates, says “Toddlers bite because they don’t have words to express their frustration.”

Valerie Browning, district manager of the Kiddie Academy, agrees. It might be because they want a toy another child has or even out of excitement. “Sometimes it’s just about communication, the child is trying to express themselves,” she adds. “Using sign language in the classroom is very helpful.”

“In my opinion, snatching another child’s work, toy or possession is the best way to provoke a child to bite,” says Khrys Crawford, Fort Thomas mother of three. “I’ve seen all three of my kids be victims at their daycare.”

But frustration isn’t always the cause.

“One out of my four was a biter,” says Melissa Spang-Anderson of Cincinnati. “It was by far the most frustrating phase I’ve encountered with my children as toddlers. She was around 2-and-a-half and it lasted about six months. She never appeared to bite out of frustration or anger. It always appeared to be a sign of love. I know it sounds strange, but she would hug and then go in for a bite. It was like she wanted to squeeze and love and hug but didn’t know how to express herself properly.”

How to Handle Biting

“I tried everything that everyone recommends,” says Spang-Anderson. “Removing her from situations, talking calmly eye to eye, biting back, staying home for weeks, talking about ‘no biting’ prior to outings, talking consequences, ‘helicoptering’ her at every event, etc. Other children bit her back, too. Nothing stopped her.”

Professionals discourage teaching children to bite back or hit.

“Matching the frustration or anger would not be a teachable moment,” says Browning. Instead, she says it’s best to show empathy to the child who was bit and to try to help the biter understand that they hurt the other child physically as well as emotionally. Her staff encourages the biter to apologize and give their “friend” a hug.

Web MD says that biting the child back definitely isn’t the right answer. “You might have heard from other parents that if your child bites you, bite your child back. Children learn by imitation. If you bite your child, the child is going to get the impression that this behavior is acceptable. The same goes for hitting a child for biting.”

Michael Fielder, M.D., with Primary Pediatrics in Florence says firmly telling the child that biting is not OK and placing them in time out is key. “You must be consistent,” he adds.

Browning says that when a child is bitten, they make sure the biter knows that is not OK, but they also give the victim a lot of attention. This shows the biter that they will not get attention for showing aggression.

“You teach them not to bite by firmly telling them ‘no’ when they do it or start to do it,” says Griffin. “You can try to distract them with a toy or an activity.”

Browning adds that it’s important to work with the family so the child isn’t just labeled and expelled from daycare. The child care workers will often shadow the kid to see if the child is more likely to bite in certain situations. “We will make sure the environment is more suitable for the child. If Johnny always bites in certain situations, we try to change the situation.”

It can be really hard on the parent of the biter because their child is hurting someone else. “I really feel like she just had to outgrow the horrible phase,” says Spang-Anderson. “Almost every parent of the child that my kid bit was very understanding and sympathetic. I left playgroups and outings crying several times.”

Fending off a Biter

Several parents say they’ve taught their children to bite back and it has worked while others discourage retaliation. Crawford says she has taught her children not to grab things from other children since it seems to provoke biting.

“It’s hard because usually biters and those being bit aren’t great with words yet,” says Katy Leftin, Fort Thomas mother of three.

Fielder suggests teaching kids to react to the biter like they would a bully. “Look them in the eye and firmly say ‘I don’t like that. Don’t do it again.’”

Biting typically happens so fast that it’s not always easy for children to defend themselves. “I tried to keep my children away from kids who were known to bite,” says Amy Lococo, Cincinnati mother of two. “We wouldn’t avoid events but I encouraged my kids to play in another area.”

Luckily my second child was never a biter or a victim of biting. Although I don’t think there’s an easy answer when it comes to preventing your child from being a victim of biting, I definitely wouldn’t encourage parents to tell their children to punch another child.