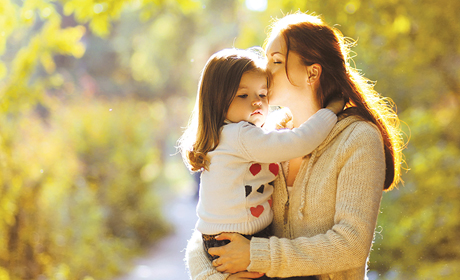 Northern Kentucky dad Brant Owens divorced his first wife when his son was 5 years old. “It was an unplanned pregnancy,” he explains, “so I think I could say that the entire marriage happened because of the child.”

It’s long been believed that divorce harms children, but does it really? The short answer is yes. However, when looking at the long-term effects of divorce, researchers now know that divorce is not as harmful to children as having to endure their parents’ toxic relationship.

Brant’s son, who is now 26 years old, “feels as if he grew up with four great parents,” Owens says. “Had we stuck together for his sake, he would have likely had two lousy parents.”

Sharon James, Parent Education Program Manager, Mediator, and Parent Coach for Beech Acres Parenting Center, says when you want to stick it out for the kids, “think about the message you’re giving them about relationships.” Even if you’re not fighting, if you’re in a bad relationship, there’s tension in the air. “Children are observers of their world,” James says, “and you’re modeling for them what love looks like.”

This was true for Owens. He remembers reaching a point of becoming detached emotionally from his entire situation. He says, “Imagine living in a house with two people who are just existing together and not thriving and enjoying together. It creates a lot of stress.”

Helen Duncan Gavin, Licensed Clinical Social Worker at the Children’s Home of Northern Kentucky, says to think of being a parent as a loving feeling you give your kids. She says, “A bad, toxic relationship takes away from that feeling.”

Gavin is also divorced. She says parents need to ask themselves, “Is this the relationship I want my kid to have?” After her divorce, Gavin worried that her bad relationship meant that her daughters would pick poor partnerships in their adulthood, but they didn’t. She says, “They picked partners who treated them like Mom did.” She was able to model a loving relationship by nurturing that feeling she gave her girls.

A parent also models how to take care of oneself. If it were your child or someone you loved existing through a bad relationship you would ask them, “Why are you doing this?” James says it’s “important to think about yourself.” Treat yourself well. This goes beyond brushing your teeth and sweeping the floor. It includes choosing healthy relationships. Everyone deserves the opportunity to experience a loving relationship. By staying in a bad partnership, you’re cheating yourself and your children out of that experience.

Children are observers. James says she frequently hears, “I knew my parents didn’t care for each other.” James says it’s a burden for children to feel that parents chose to stay in an unhappy marriage for their sake. Telling your children that “we waited until you were old enough to understand,” or “we waited until you were out of high school” does not make them feel loved. Instead, it makes them feel guilty. “Kids never say, ‘thank you for doing that,’” James says.

If somehow the parents manage to keep their discord unknown to the child, a divorce announcement may make them feel very disillusioned about their childhood. Was it fake? Did they ever love one another? These are the questions they will struggle with into their adulthood when parents hold on until the kids are a certain age.

Is It Really for the child’s Sake?

James says to challenge yourself when you feel yourself leaning towards that reasoning for keeping the relationship going. Is it really for the sake of the kids? There are many layers to divorce. She suggests counseling or at least a relationship consultation to help soul search and sift through why you may be willing to stay in a bad relationship. Don’t pin it on the kids until you’ve sifted through your emotions. Maybe you’re afraid to let go for other reasons. Maybe verbalizing that it’s for the kids sounds noble. In truth, you may really be afraid of the unknown, or you could be holding on to some hope that it will work out. Maybe the prospect of a new home and a new job without spousal support is scary, or you fear that you’ll not be able to see the kids enough. These feelings are valid. You owe it to yourself and your children to figure it out.

Sometimes, James says, “staying together can be a very selfish thing.” It keeps a comfortable facade going and makes you feel like less of a “bad guy” than if you were to initiate divorce.

Other times, it’s not the divorce that’s about the kids. Instead your life becomes about the kids and your relationship gets lost. Gavin says,  “People forget to nurture the relationship and instead they limp across the parenting finish line.” When this happens, parents are left alone in an empty nest and have no idea how to continue on with their relationship. This gives the impression that they were together for the kids’ sake when really they simply lost their relationship along the way. Couples counseling can help parents decide how to move forward with what’s best for the whole family.

Regardless of the reasons for a divorce or for staying, it’s how you parent through the hard times that matters most. This is where children feel the most impact. Kids of different ages respond differently. Younger kids tend to say things like, “If I just behave better then everything will be OK.” James says, “If there are different parenting styles, when the kid hears fights about them they will recreate that ‘this is about me.’”

Younger children also worry about things like where they’re going to live. James says to tell them what you know, such as where they will go to school and where they will live, but don’t give adult information like “Mom is having an affair.” That’s not their business. Give the child support and security.

Teens tend to respond in anger and are more vocal about how they feel. James says, “They want information” … and they’ll demand to know why. James warns, “Don’t answer the intimate questions and don’t bash the other parent.” This age group will also tend to freak out about the prospect of their parents dating, because they’re also dating, James says. It’s more about how embarrassing it all is for teens.

If a parent feels they were jilted, they may want the children “on their side.” This is when bashing happens. James says, “You’re trying to alienate your kid and that’s not OK.” Do not expose your child to toxic things.

“The stress of the divorce caused me to lick my own wounds and perhaps have less to offer my son, emotionally, for a period of time,” Owens says. “But once that period ended, my better state of mind and happiness allowed me to be a much better parent and influence in his life.”

James says, “There’s an emotional process, and it never ends.” Children will revisit the divorce many times in different stages of their life and analyze what happened. Parents should also revisit what happened. Gavin stresses the importance of doing this. She says, “If you don’t dig into your baggage before you get married again, it will explode on you.”

Owens agrees. He says, “If you don’t take the opportunity to self reflect and understand what you did wrong and what went wrong, you run the risk of making the same mistakes again. Work on yourself in order to move forward to a better life and better relationships.” Owens is 14 years into his second marriage and he says, “My second marriage has been 14 years of bliss, truly.”