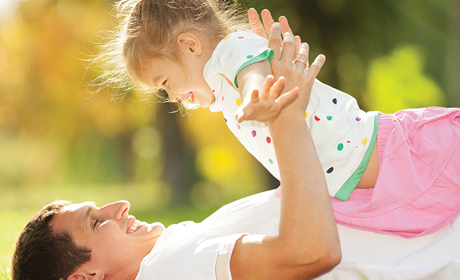 Cincinnati mom, Sarah Hunt, says her two boys are big fans of creating puppet shows. “The puppets are simple paper bag or sock puppets and the “stage” is whatever shipping box they can find in the basement,” she says.

Sometimes play doesn’t look much like learning, and to parents, play often looks like a plain mess. Parents are tempted to focus on the latest technology, downloading educational apps, and whipping out flash cards to give their kids an edge. However, experiential learning is a child’s foundation for life. Kids need to play with real things and experience real people. Children who engage all of their senses through play create the context they need for understanding the world they live in.

Get Real for Language

Language is social and emotional. Going for coffee with a bestie will prove that to anyone, although socializing with a friend is using language we already know, and not the same as learning a language. However, the same principle applies when learning a language, even in infancy. John Hutton, M.D., clinical research fellow at Cincinnati Children’s Hospital, co-owner of the blue manatee children’s bookstore, and author of the Baby Unplugged book series, says, “Babies only really process language when spoken to by a real person.” Audio, video and flash cards have no context to which the child can relate. What they relate to is their caregivers engaging them through play. Babies relate to holding familiar objects in their hands and hearing the words that label these objects coming from Mom and Dad. Apple. Shoe. Cup. All senses are engaged.

Hutton says, “Humans are social animals and learn through communication and imitation,” especially during those first three years when families experience intense togetherness. What happens when a child interacts with her primary caregiver is so much of what she learns. The more you talk to your baby and engage in real-world playtime together, the more you support her foundation for learning as well as her social-emotional bonds.

Play With Your Child

Connie Harrison, program manager for Every Child Succeeds at Beech Acres Parenting Center, stresses that trust and competence builds from creating firm attachments to parents as infants. When a child is first strongly attached, he’s then able to branch out and test the unknown world around him as he becomes a toddler, making playtime with your toddler crucial.

Both Hutton and Harrison note the importance of tailoring activities to be on target with the child’s age and development. Hutton points out that even though a toddler is not as physically fragile as an infant, “Toddlers need as much nurturing and attention as they did as infants.”

When it comes to purchasing toys, Hutton encourages parents to resist flashy ones or screen-based “educational” apps. What toddlers crave is exploration as they’re learning the world around them. Open-ended toys that encourage a child to test and understand his own environment really are best. Hutton applies the “90/10 rule.” A toy should be 90 percent the child and 10 percent the toy. Examples of these types of toys are blocks, balls, or a repurposed empty box to color, fill, dump, climb into and explore. Even repeated trips to the back yard will provide new learning experiences every time. Harrison points out that toddlers find this repetition comforting. And Hunt says she loves to send her kids to the back yard to figure something out. “It’s pretty inspiring to see what they can come up with just some sticks in the yard,” she says about her two sons. “They might build something with twigs, or have an epic sword battle with sticks, or just hoard them in piles and then protect them in a battle for dominance and land ownership.”

Observations made with all five senses is a skill built by playing with real stuff and can actually make children better readers down the road. Tony Lawson, director at Duke Energy Children’s Museum at Cincinnati Museum Center, reminds caregivers that observation is a basic science-process skill. When given a real apple versus a plastic apple versus a picture of an apple, a child concludes very different things about what is essentially the same object. Of those three, there’s only one that you can cut, bruise, smell, and taste. A real apple. Touching the rough bark of a tree does more for building reading skills than flashcards do. By exploring a real tree, a child is creating the context that will fire up the jet engines of her imagination when she begins to read words on a page.

The Purpose of Boredom

Sometimes pretend play and imagination can get a bad rap, especially when it’s described as daydreaming. However, it plays a large role in learning and children need the opportunity to hone that skill. Consider when a child plays dress-up or when a child stalks around the back yard in search of dinosaur bones, she is still playing with real tangible items but she is also letting her brain take play to the next level. She’s creating new neural pathways and most importantly she’s learning how to deal with boredom — that anxious feeling a person gets when they don’t know what’s going to happen next.

Playing dress up or Mr. Potato Head on an app does not fire the same neural pathways. A child can build a character, but that character is static. After choosing the attributes of Mr. Potato Head on an app, the child cannot then bring the character into his world for further creative play. Hutton says the child is still restricted within the confines of the app’s capabilities. It’s not open-ended. That next level of creative play is where the imagination works for future learning.

The play experiences that enhance the ability to observe and imagine, also foster self-soothing skills. Hutton says that with the ever-present temptation of “educational,” screen-based options it can be hard to resist handing a toddler an iPad with a fun app on it rather than encouraging him to work through his boredom or crankiness.

Car commutes are a great example. DVD players are installed in the back seat to help kids curb the boredom of a commute. But, this is best time for daydreaming. Hutton says, “When you’re daydreaming, you’re practicing the imagery process.” Your visual field lights up and later on, when reading a good book, that same part of your brain is working. “Your brain likes to do those things. Kids find comfort and work through problems while daydreaming,” he says. “The screen switches that imagination off.”

Tantrums are a normal and expected developmental stage. Hutton says the choice the parent has is to either treat the symptom and pacify the toddler with a movie or a tech-based toy, or to address them developmentally. Tantrums are about communication. Toddlers do not yet have the ability to effectively communicate their frustrations. “Talk to them, or let them burn it out,” Hutton says. Easy to say when he’s not the one standing in the supermarket with a screaming, flailing toddler! But Hutton is also a parent and knows that we all get self-conscious over our toddler’s behavior. However, he warns that pacifying a cranky child with screen time will increase poor behavior in the long term. Imaginative playtime within the real-world setting directly affects the child’s ability to cope and lessens tantrum episodes because the child knows how to self soothe.

Hutton says “screen kids” have a harder time coping with down time. The American Academy of Pediatrics recommends that kids remain “screen free” until at least 2 years of age. Hutton challenges parents to keep their children “screen free until 3.” The best way to determine if a child is ready to incorporate screen time into her life (TV, iPads, etc.) is based on her ability to self soothe.

The importance of experiential learning and real-world playtime impacts every area of a child’s development, whether it’s learning language through wordplay, learning about the world around him by handling real objects over screens, or simply sitting back and daydreaming.