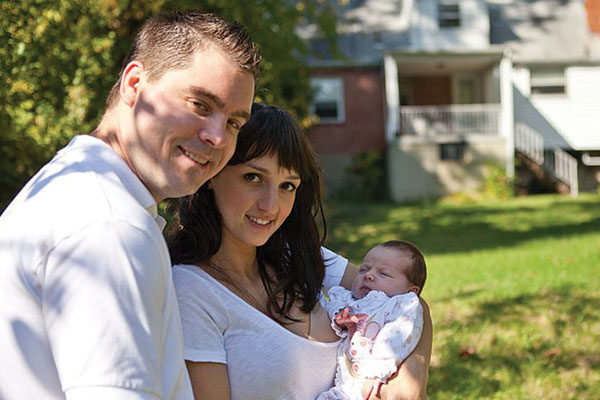 Aggie Kindberg knew she wanted to raise a bilingual baby. Originally from Slovakia, Aggie met and married Cincinnati native Matt Kindberg a few years ago, and now live in Pleasant Ridge with their 11-month-old daughter Annabelle.

With her family still in Slovakia, it was very important to Aggie that Annabelle be raised speaking Hungarian. So, she started early, “I began speaking Hungarian to my daughter when she was in my belly!” Aggie says.

And she still does. In fact, at home, Hungarian’s the only language she uses with Annabelle. Because her daughter is surrounded by English everywhere she goes, Aggie is confident that Annabelle pick up English easily. As a result of her approach, Aggie says Annabelle already knows several English and Hungarian words. “She knows that ‘cica’ means ‘kitty’ and ‘még’ means ‘more.’ We also use sign language to further emphasize these words,” she says.

Children are hard-wired to easily learn and assimilate language from an early age — so if you begin teaching your child early, you give him the gift of multilingualism.

Aimee Hollstegge, a Spanish teacher at St. Nicholas Academy and the Cincinnati Family Enrichment Center (CFEC) says, “the sooner children start listening to another language, the better. Children’s ears are very sensitive, and they listen to phonetic sounds that adults just don’t hear as we get older.”

As a result, parents wanting to raise a bilingual child should start from the beginning, explains Jennifer Ortiz, a board-certified music therapist and teacher at the CFEC. Because infants learn by mimicking the sounds and expressions around them, Ortiz says that babies are prime candidates for learning multiple languages. She explains:
“While babies babble at first and typically don’t speak their first meaningful words until 9-12 months or after, they listen to us and take things in from birth and even in the womb. As infants vocalize and explore the sounds they can make, their tones and patterns are based on those that they hear around them. Exposing young children to two languages gives them a greater variety of word sounds and patterns to explore.”

In addition, explains Ortiz, by taking the time to help teach a child a second language, parents will likely spend more time talking with their child — and this is one of the best ways to help their speech develop.

With that in mind, it would seem that families with a bilingual parent would have a leg up, as the child is more likely to grow up hearing both languages from the beginning. However, Ortiz adds that parents who are learning (or refreshing their knowledge of a second language shouldn’t despair, as long as they get an early start.

“Starting early gives those parents more time to become familiar and comfortable with the language, so that as the child is able to seek out more words, the parent can be ready to teach more vocabulary,” concludes Ortiz.

Incorporating Multiple Languages
With the value of starting early a given – how exactly can a parent do it? There are a few popular approaches for introducing multiple languages, including:
• Having each parent speak only one language, so that the child learns to distinguish between the two
• Having the family speak one language inside the home, while the child learns the other language from the community outside the home
• Total and partial immersion schools
• Language classes, playgroups, and books/videos

The first two methods apply to families where at least one parent is already fluent in another language, and is often associated with families with a non-native English speaker. Jill Landis, owner of I Can Play en Français, a French immersion enrichment program for children in Cincinnati, says that it’s best for the non-English speaking parent to interact with the child whenever they are together.

However, you don’t have to be fluent in another language in order to raise a bilingual child. According to Karen L. Mulligan, principal of the Fairview-Clifton German Language School, immersion schools offer children the chance to learn multiple languages by using the same approaches parents use in teaching their children English.

“Most children are immersed in English throughout their daily lives. As a result, they will learn English much quicker than a second language,” Mulligan says. She adds, “Immersion programs focus on acquisition of spoken vocabulary using lots of picture clues, repetition, and songs — much like how parents teach their own children to speak English.”

Lastly, there are plenty of classes, playgroups, and events in the area that can help expose your child to another language. Megan Meconi, owner of the Cincinnati Spanish Academy, suggests that parents look into bilingual classes or even bilingual child care providers to help kids learn another language. In fact, Meconi says that the Cincinnati Spanish Academy offers weekly classes for kids ages 3 and up. On a day-to-day basis, Meconi suggests that parents incorporate toys, games, and movies in a second language to ensure a steady pace of learning.

Whichever approach (or combination of approaches) you decide, Landis says that you must make it fun. “Almost every adult I’ve ever talked to can tell me a story about their bad experience learning a foreign language — and that now they are a ‘dunce’ at it. If children come to associate learning a foreign language with play — especially with people they care about and who take an interest in them — chances are they will thrive as speakers,” she concludes.

Bilingual Benefits
It’s difficult to quantify all of the advantages to knowing multiple languages, mainly due to the fact that several benefits (college admission, job placement, etc.) happen well down the line. However, experts agree that bilingual kids generally achieve greater academic achievement in other areas of study, including reading, social studies, and mathematics.

Mulligan says that children who study a foreign language “have an improved self‑concept and sense of achievement in school. They show greater cognitive development in such areas as mental flexibility, creativity, divergent thinking, and higher‑order thinking skills.”
There are also ways that knowing a foreign language can benefit the entire family. For couples learning a new language together, the process can create a great sense of connection and bonding as a family. For couples with one non-native English speaker, the process of teaching Baby another language can extend to the other partner.

In fact, Aggie’s approach isn’t just working for baby Annabelle — Matt says he is picking up Hungarian, too. Between his immersion in Hungarian during their annual visits to Slovakia, and Aggie’s emphasis on speaking her language at home, Matt says that he now understands a lot of the language. In this way, the process of teaching Annabelle Hungarian has further connected the Kindberg family — and, isn’t that what language is meant to do?

Sarah McCosham is a local writer and mom.