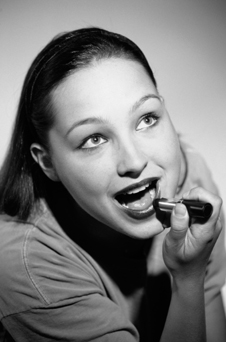 Wearing makeup is a rite of passage for young girls. It ranks in importance right alongside getting a first job or obtaining a driver’s license. Between the ages of 12 and 14, most girls take this first step toward self-expression. And, as parents, we want to assist our daughters on their road to independence by allowing them to make decisions without undue interference.

But how much is too much? When should they start? When do we say stop? How do we prevent our girls from looking like mini-Madonnas, especially when we can’t hover over them 24 hours a day?

Some parents feel that 12 is too young to be wearing any makeup at all. For Julie, mother of 12-year-old Kayla, the issue has become a daily battle. Julie stands firm by her decision, but realizes she’s in the minority.

The makeup issue arises because at age 12, children are no longer in elementary school. They’ve taken a major step by entering middle school, with its new responsibilities and pressures. Television shows, magazines and movies geared to preteens and teens contribute to many disagreements parents and daughters face when it comes to makeup.

In one recent look at a popular teen magazine, there were over 100 images of beauty and/or beauty products smiling from the pages. Even adults find it difficult not to be influenced by ads. How can we expect anything different from our children? This is the age when girls take the first step towards maturity and begin the process of discovering themselves.

Suzanne and her husband felt the same as Julie until their daughter Sarah, also age 12, presented her argument in a different light. She told them, “Everyone tells me I’m growing up and I need to be more responsible with my homework and chores. But I’m not getting any of the privileges that go with growing up, just the work.”

After a family discussion, they decided to take Sarah to the makeup counter at a large department store for her 13th birthday and give her an “age appropriate” makeover. The clerk showed Sarah how to apply and remove makeup properly and taught her the best way to care for her skin.

Patty, a mother of two daughters, now 15 and 17, says of her own experiences, “We established a rule early on, that when the girls were with their own friends, they could look pretty much the way they wanted to (body piercing excluded)! However, at home with the family, if I took them shopping or if we had company, they had to wear makeup and clothing that I approved of.

The hardest part was getting used to them wearing a way-too-bright blush that they applied with a heavy hand. But the excessive use of makeup eventually faded as they matured. In the meantime, I bit my tongue and said nothing. I decided to live with the ‘choose your battles carefully’ philosophy. This was not drugs, alcohol, guns or even curfew. It was makeup and nothing more. And I stuck to my guns about how the girls were to look around me.”

Barbara, mom of 14-year-old Lauren, said she had few problems with her daughter’s desire to start wearing makeup, because of the progressive evolution that was established early on. She says, “When Lauren wanted to start with makeup, she asked if she could borrow a lipstick. I chose the palest color I had and let her wear it to school.

When the other kids complimented her, which they probably would have done even if she’d been wearing purple, she was happy with that color. Every few months, she would ask to try something new. The only firm rule I had was no mascara until 16. I was afraid of eye infections if she accidentally touched her eye with the wand. An eyelash curler as a birthday present was so much fun for her, she didn’t mind waiting.”

How Much Is Too Much?

What if your daughter is one of the small minority that leaves the house with a squeaky clean face every morning only to put on enough makeup to give Mimi from “The Drew Carey Show” some competition? One mom suspected just that. Rather than mention her suspicions, she paid a surprise visit to the school one afternoon to take her child for a scheduled doctor’s appointment. The embarrassment the daughter felt when her mom caught her (plus the subsequent grounding) was enough to stop the overindulgence.

For girls involved in sports, makeup is often a non-issue. For instance, Debbie has two teen girls, ages 14 and 16, and insists she never had any of the usual problems. “The girls knew it would be silly for them to get all dolled up to go out and sweat on the basketball court!”

Keeping the issue in perspective and helping our girls make the right choices seems to be the most common line of defense. Each family must decide for itself how much is too much and when is the right time for girls to take this gigantic leap, the first of many, into the independent teenage years.

Linda Chiara is a mother and freelance writer.