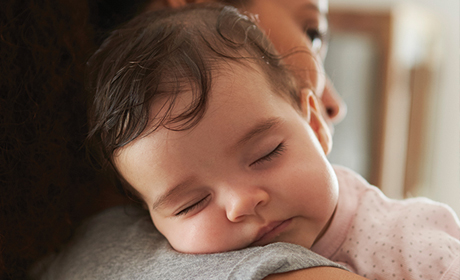 “My daughter went through a phase where she was terrified to go to sleep. It came out of nowhere. It was difficult for us as parents because we had never gone through this with any of our other kids. They were always really good sleepers. She was terrified to even be in her room by herself,” says mom Lisa Knox.

All parents can relate to sleepless nights, bedtime struggles and full body exhaustion. Dr. Seuss hit the nail on the head when he compared sleep to a unicorn — as soon as you think you’ve caught it, the mythical creature escapes. Every child is different. Some require more rest, while others function well with less. Sleep patterns can also be affected by developmental milestones, brain development, new fears and by other environmental factors.

Newborns require the most sleep. Unfortunately, they tend to only sleep in two- to four-hour intervals and wake often for food. They’re unable to self soothe, and are incapable of controlling their reflexes. This can also cause newborns to wake frequently. As babies get a little bit older, they may begin to sleep for longer stretches at night. Junaid Malik, M.D., at TriHealth Bethesda Sleep Center, shared that between birth and age 1 (and for some up until the age 2), kids are establishing their sleep patterns. You can help your child establish these patterns by creating a bedtime routine and sticking to it. This routine may include dimming the lights, giving him a bath, feeding him or reading him a story. Low stimulus, calming activities are the most effective.

Bring on the toddler and preschool bedtime battles! Kids in this age range have a hard time calming down and often resist bedtime. This resistance can be a straight out “no” or procrastination in the form of needing more water or using the potty a hundred times. Continue to stick to a bedtime routine. Set guidelines for what bedtime looks like in your house, and make sure he knows them.

At this age toddlers may also begin to experience nightmares or separation anxiety. You can support your child by adding a nightlight or giving him a lovey, such as a stuffed animal or blanket, to help comfort him.

By 5 years of age, most school age children have outgrown a midday nap. They do, however, have a multitude of things that can keep them up at night like homework, sports and electronics. Often, these activities interfere with their scheduled bedtime and push it back later and later into the night. Malik recommends removing TVs from bedrooms, which will help reduce the distractions at bedtime and get your child to sleep faster at night.

Once kids begin puberty, you’ll likely see another shift in sleep. First, their brains are going through another round of major development and secondly, teens experience a physiological shift in sleep called Phase Delay, which is a shift in their circadian rhythm. They begin to feel tired about two hours later than when they used to. This affects their wake up time. Teens try to “make up” the two-hour delay by sleeping in the next morning. Unfortunately, school starts early and with sports, jobs and homework sprinkled in, teens are likely not getting all of the sleep that they need.

“Babies, children and teens need significantly more rest than adults to support their rapid mental and physical development. Most parents know that growing kids need good sleep, but many don’t know just how many hours kids require, and what the impact can be of missing as little as 30 to 60 minutes of sleep time,” according to the National Sleep Foundation’s website.

Here’s the recommended amount of sleep needed by each age group:

“When children are not able to meet their biological needs such as sleep, hunger or pain, they’re not able to regulate their bodies when demands are put on them. It’s important that these needs are met so they can be successful at home or at school,” says Katie Strubbe, MA, BCBA, COBA, a behavior interventions coach with Warren/Butler County Collaborative Behavior Coaching.

Lack of sleep can also be confused with attention-deficit/hyperactivity disorder (ADHD). ADHD and sleep problems share many of the same signs including nervousness, hyperactivity, mood swings, aggressive behavior and difficulty concentrating. You play a vital role in helping your kids get the sleep that they need. Malik adds that it’s normal to wake up every two hours, but it’s abnormal to get up and do something. He recommends seeing a physician if your child is going to bed tired and waking up tired.

SIGNS OF NOT ENOUGH SLEEP